This tip covers using Drafts to keep up with running lists. These are the type of lists you might keep of movies or TV shows you want to watch, books you have been recommended, or things like errands you need to run, or stuff you need to grab at the store.

In my personal use, I have lists for movies, books, and also specific stores, like a “Hardware Store” list to remember those pesky little items you always forget when you get there.

The great advantage of using this action and workflow, is that adding new items to your lists becomes trivial. No need to open a notes app, browse around to find the right “Movies” note, scroll to the right place, etc. Instead, just pull out your phone, type the item, run the action, and put your phone away.

Start with the brief demo video showing this workflow in use. The remainder of the article covers installing the example action and related workspace, and explains how the system works in greater detail. 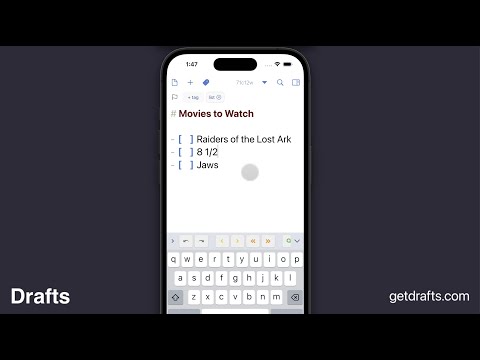 Start by installing the example action from the Drafts Directory:

Use the “Install” button on that page on any device with Drafts installed. Follow prompts in Drafts to assign an action group for the action. It can be moved later.

You should then receive a confirmation banner say “1 item added to list” and you should be looking at a new, empty draft in the editor.

Now do those steps again with a different movie name. The process should be mostly the same, other than the prompt will now also offer the “Movies” list as an existing list to select.

You may be wondering what happened; let’s review what the action did:

Now, anytime you have a new thing you want in a list, quickly pop open Drafts, type just that thing, run this action, and it will be filed away for later in your lists.

Now that we have an easy way to capture items to our set of lists, how do we use the lists?

Well, to begin with, the lists created by this action are just drafts. The only distinction being that they are assigned the tag “list”. Like any other drafts in your note store, you can open them in the editor, make changes, check things off, remove items, add items directly to the list, etc. You can search for “Movies” in quick search, and get to your movie list.

But, if you start to get several lists setup and want a quick way to access and review them, the best way to do that is with a workspace.

You could create your own, but to expedite the process, install the “Lists” example workspace. Workspaces apply sets of filters and settings to the draft list, and this one focuses the list to show only your “List” drafts.

Alternate, you can also install and use the below “Open List” example action:

This action opens a prompt for you to select a list, and opens it in the editor. This is a quick way to jump to a specific list.

The “Open List” action works especially well with Home Screen widgets. Assign an item in a Drafts Grid widget this action, and you have a shortcut to open Drafts directly to any of your lists quickly.

11 Likes
Append to selected file (from list of running files – a la Merlin Mann's "runx" file scheme)
Add to list action
How to update a draft (prepend) within drafts
So where do I start?
Add to List - iOS Action
Quick Drafts Keyboard Shortcut
Verity April 24, 2018, 2:46pm #2

Where do I find the scripts so they can be edited?

@Verity
In the Drafts Directory.

Tap “+” to add a new action and select “Visit Directory”; at the moment, if you select “Recent Actions” on the resulting webpage, “Add to list” is at the top, or just search for it. Tap on the action to open it’s description.

Click on the “Install” Button and select the group to install it into in your Drafts. You can then edit it in your action list by swiping right on the action name and tapping “Edit”.

Swipe to the right on an action to get to its “Edit” screen. Details here.

You’ll need to tap on the steps, then the script step…the lines you are looking to modify are at the top of the script and look like:

If you are not familiar with scripting it can look a little intimidating, but it’s not too bad. The categories is an array, and is just a comma-separated list of quoted strings. You can have as many or as few categories as needed.

Thank you, both of you

I reckon I could get the hang of that!

Thanks for this script, It will definitely see a lot of use… one question though: is there any way to add multiple items at once? Example: if I am with a friend who says “you really need to see x, y, and z” how can I modify the script to accept data points from multiple successive lines?
Thanks in advance,

Javascript’s standard Array.map can take an existing function on a single string, and apply it to a whole list of strings.

Is there a way to cross off [x] items e.g. from a shopping list?

They are tappable task marks. Is that what you are asking?

Experimenting with a version that:

Not listed, so it doesn’t step on Greg’s example, but you can look at it here.

Yes I have those. But to delete the ones done. I.e. in a shopping list it deletes the items you have picked up leaving the ones you need, when you next open the note.
Hope that makes sense.

This is great, thanks!

You can modify this action that I created which moves the done tasks to the bottom of the list to do what you need.

Re the final lines of that action

(rather than just evaluating to a function value ?)

Is it possible to run this script without the check boxes?

You know what I’d like here? I’d like the action to turn each listed item into a tappable link to search Google or Duck Duck Go so when I later come back to the list it’s easy to look up whatever the thing is.

This great thanks appreciated.

Is there a way to adapt this script to prepend rather than append text to an existing draft? I keep a running list of favourite quotes with the most recent at the top. At the moment when I open the draft each time and the cursor default to the end of the text. I’ve had a look but coding isn’ t my strong point!

Yes, it’s certainly possible to alter the script to put new list items at the top. A little more complex if you want to maintain the heading, since the script would have to local the right insertion point, not just tack text on the top.

Not restoring the last cursor position is a bug in the current release which will be fixed in the next update.