Drafts 19 (macOS) has been released in the Mac App Store, details below. 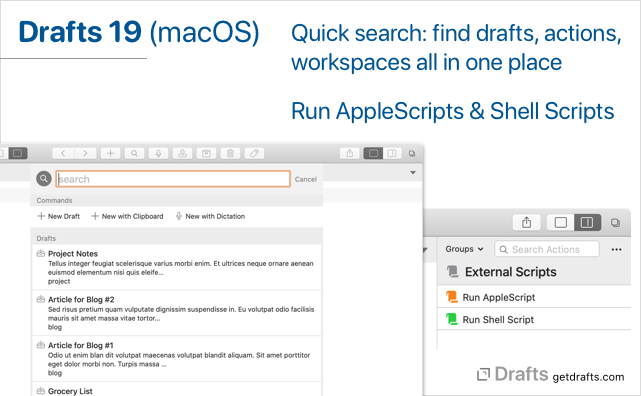 Quick Search sounds great! Unfortunately, because I’m using some older software, I’m not able to update from Mojave to take advantage of it. But I’m glad I can use it on iOS.

I see the Ruby example in the docs uses a #!/usr/bin/env ruby shebang line. Is the environment in which the script runs the same barebones environment one would have if there’s no .bashrc or .bash_profile to change the $PATH? Or are you somehow processing the user’s initialization files before running the script?

I’m not altering anything, so it’s possible that shebang would need to be adjusted for the way you have Ruby installed.

To be honest, I did not get to test that feature as extensively as I’d like to understand the mechanics of the Unix environment used. The script gets saved to the ~/Library/Application Scripts/com.agiletortoise.Drafts-OSX folder, and handed off and executed using NSUnixUserTask, which runs it in the user space.

Thanks, I’ll do some testing of the environment when I’m at my Mac tonight.

Read the examples section of man env and you’ll see why it’s typical to use #!/usr/bin/env ruby.

Essentially the main reason is that the ruby executable might possibly be a script that itself needs to be executed. For example, rbenv uses a shell script to call through to the actual ruby binary.

It should be safe for pretty much any use case, but I’d be interested to hear if you learn about something I haven’t considered yet.