I’m working on prioritizing a round of general usability improvements and changes. I’d like to hear about what would help you most using Drafts (on iOS) day to day.

I don’t want to hear about services to integrate, or how to completely re-design the UI, but little annoyances & foibles or simple additions that would make the app smoother and easier for you for normal day to day use.

I’d also love to see tappable checkboxes on the Apple Watch, so that I can completed lists on the go.

And for longer writing, a typewriter mode would be very welcome. Not sure if that’s small, however.

Also, with Critic Markup, I would love to see an improvement to the {==highlight==} syntax. Something like this. 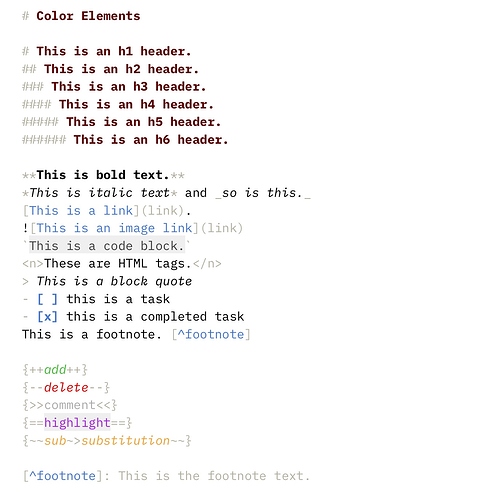 I often struggle to swipe out the action groups panel, I have no idea how to resolve it though. I usually end up activating swipe over instead.

This may be close to Rosemary’s problem. I bring up the Actions panel all the time when I’m trying to scroll. I think it’s because I’m usually working in Split View, so my finger often starts in the right half of the draft and slides a bit to the left as I drag upward. I’d prefer a more definitive sideways slide be required to bring out the Actions panel.

Dunno how big of a change something like this would be, but it would be great if link mode were a property of individual drafts instead of the editor.

I find when using this tip (which has proven very useful), I lose link mode if I switch to another draft and back to my list and that gets very frustrating.

@drdrang, Do you ever have the problem with the draft list or only the action list? I hadn’t looked at this in a while and I found a math error calculating the travel required to initiate the gesture - but it was only an error on the action list and could easily be the cause.

I don’t think that’s a practical change. Originally (years ago), link mode did not disable when you switched draft, but that led to a lot of problems. Constant support queries on why they could edit a draft. You might find some of the related tips on working lists useful, if you haven’t seen that post. Does not address this specifically, however.

I was suggesting tying link mode to the Draft object rather than the Editor object, so that it would switch or not switch depending on how the draft you were switching to had the property set. So switch to a draft that has its linkModeEnabled=true, it’s enabled; switch to a draft that has linkModeEnabled=false, then it’s disabled. Make it false by default.

That way, if I enable link mode on a draft, I can be assured it will still be in link mode if I switch to another draft and then back. The link mode state of the intervening draft—whether on or off— would not change the state of the original draft.

That would take care of both my frustration and the quite understandable frustration of people who weren’t able to edit their drafts in the old way of doing it.

The ability to specify filters or a workspace for the apple watch.

An old beef of mine: Can we make it fewer interactions in the edit/test cycle for a single-step javascript action? I realise this one might take more thought, rather than being a “quick win”.

The possibility to export notes including meta data.

(Sorry if I have missed something and I think this is already possible if you create an action but would like a native method available in both iOS and OSX.)

I click the ‘i’ button (top-left) to copy a draft. It’s a slight annoyance that I then have to slide the box up to get the row with ‘contents UUID Link’ into view in order to do the copy. At least this is my experience on iPad Mini with software keyboard active. Could this row just be moved to the top?

On an external keyboard, when using the down arrow to move through a list of drafts, it would be really good if you could move further down (i.e., scroll through) than only what’s shown on screen. This is particularly confusing as the “active draft” keeps changing when you’ve gone down below the bottom of the screen. Keyboard support is otherwise great, but this for me, sticks out like a sore thumb.

Finally, I’d welcome the opportunity to be able to set how long the action list “search” persists for. At present, it runs for perpetuity. Would nice to have the option/s for this to reset automatically rather than having to tap on the tiny ‘x’ each time after use.

You can dismiss my suggestion if it is not easy to implement. The export funktion from Drafts on iOS to csv works just perfect (including time and place and other metadata) and I have no problem exporting data that way. I just missed this option on OSX even though text of the content is very useful.

Sometimes I run actions that don’t act on the current draft (e.g. do something with the clipboard, create a new draft from a template and work on that, etc) and it’s weird to see that listed on whatever draft happened to be current at the time.