I did use both Cloud Outliner Pro and CarbonFin Outliner for lots of things.
Recently, i discovered Outlinely, which does some things better than the above.
Sadly, it is an subscription App too …

I often used them to create inital Mind Maps in iThoughts.

But the more i play around with Drafts, the less i see the need to use Outline Apps.
Those can import and explort as OPML, and i could import into iThoughts and then export again to those Outliners.

So, just a short question: Do YOU still use Outliner / OPML Apps?
If yes, which one and for what tasks?
Or can Drafts fill your Outline needs?

I’ve never used one. Downloaded MindNode4, played with the for a couple of minutes, and then deleted it. I just keep notes in markdown.

For the most part I use Drafts. However, if I’m working on a big post, I often start in MindNode to gather my thoughts. Once I’m done, I’ll export a Markdown outline to Drafts and get to writing.

The reason for using MindNode: visualization. Sometimes that extra bit helps me. But I use it every-so-often. Most stuff starts in Drafts.

As well as a couple of mind mapping apps (which I use when I specifically want to link out topics in a more spontaneous way or need to present to a room) I do continue to use outliner apps. Primarily these days I use Omnioutliner, though I have some older ones still on my devices by the looks of it; I must migrate that data at some point.

It has support for multiple columns and data types as well as plenty of prebuilt options for templating, exporting and styling. It also permits sorting on individual columns.

Mac Drafts development aside, there’s the cross device availability of the software and though I’m not using the pro version on my Mac, there’s a huge automaton potential there.

I do tend to use it for simple outlining as I have several templates for things like packing and recurring projects but for simple check lists I probably do create the in Drafts more often.

The thing that’s really useful in the app (and typically with mind mapping apps too) I think is the way nested elements can be collapsed and consolidated.

Whilst Drafts has me covered for quick, brief(ish) outlines, I turn to a more specialised app for helping me do that. It’s just like if I were writing a book I’d switch to Scrivener and if I’m writing tehnical documentation for work with diagrams and tables I’d be using Microsoft Word.

Drafts is a starting point for a lot of my content and with version 5 it takes me further than ever before, but there will always come a time when a more specialist app will take you over the line … but it quite possily wasn’t the place to get you started.

Hello nahumck,
I mostly do it the other way around, starting with a fast outline and then exporting to iThoughts (which I prefer over MindNode 4 or 5) to add more details and rearrange things.
I also export them back to the Outline Apps sometimes.

I am going to check, if MarkDown outlines from Drafts can be used as well.

Hello sylumer,
yes, I looked at OmiOutliner already multiple times.
But again, it is an subscription App.
Their number is rapidly growing, which makes me panic…

Anyway, yes - the possibility to indent and outdent, to move single and multiple lines and to collapse whole sections is a great thing at Outline Apps.

Some of this is now possible with Drafts, but not the collapsing, I think.
(Did not yet check all actions)

But then, export to and import from iThoughts is also important for me.
Export is always easy, as iThoughts understands basically edited and arranged text files - as most mind mapper Apps.
But the other way around may be tricky.

This was the reason why I asked - maybe people did also go this road.
But it does not seem so.

OmniOutliner is not a subscription app. 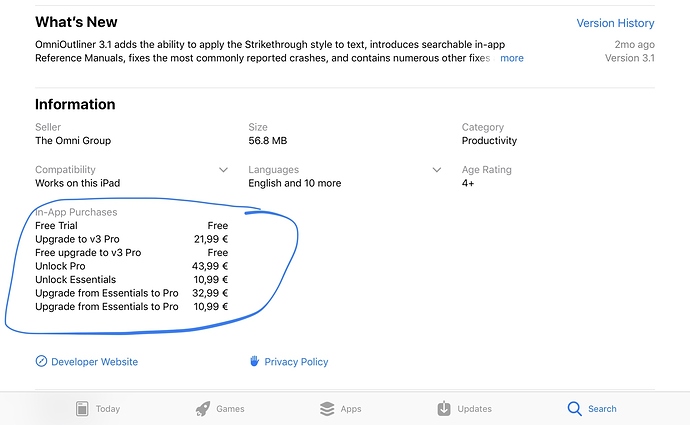 That pretty much looks like subscriptions.
Going to have a closed look, thanks!

Huh? It’s asking for a single payment to upgrade.

Yes, it seems so.
But that list of different prices looked like a subscription model to me.
My fault

I do use OmniOutliner and have for years. I’ve been using Drafts for some of the same things lately.

I would love to be able to collapse the headers in Drafts.

Downloaded it and testing the regular version.

But of course, collapsing stuff “text folding” is a PRO feature

Sooooo, please add this to Drafts

Folding text is already in the feature request list in relation to Markdown headers. I’d suggest adding an entry to it for asking for use with outline lists too.

In the future, I’d love to see the ability to collapse the text below Markdown headers, much like Folding Text does on the Mac, and Editorial on iOS. Background: I keep a text document open on my Mac all day at the office, and take notes throughout the day as various matters arrive. Right now I use Folding Text on the Mac for this. When I move on from one matter (such as a phone call) to another, I collapse the previous matter by clicking on the Markdown header (pound symbol), which gives me a …

You are saying that collapsing sections in OmniOutliner is a pro feature?

I can’t test it because I have pro, but that’s a pretty standard outlining feature to lock away for pro users only.

Hello comfortablynick,
it seems so: 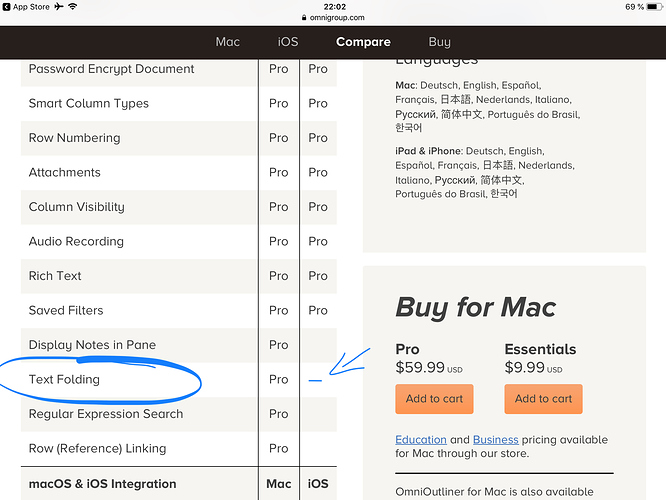 Reading that again, it looks like it is not available on iOS at all!

Not to dwell on the product too much, but I don’t think that it is a Pro feature.

As I understand it, Disclosure rows available in Essentials is probably what we all think of in terms of expanding and collapsing an outline. I think it may also be in the free reader. Sidebar Sections is in Pro and may be what has caused the confusion.

If you watch the app video on the app store page you’ll see the first thing they do is uncollapse some rows, so definitely in there. Later in the video they demo the side bar sections functionality.

Yes, I reinstalled and tested this - it definitely is in the normal version.

But what is meant with “Text Folding”?
I don’t think that this is the sidebar thingy.