In the future, I’d love to see the ability to collapse the text below Markdown headers, much like Folding Text does on the Mac, and Editorial on iOS.

Background: I keep a text document open on my Mac all day at the office, and take notes throughout the day as various matters arrive. Right now I use Folding Text on the Mac for this. When I move on from one matter (such as a phone call) to another, I collapse the previous matter by clicking on the Markdown header (pound symbol), which gives me a nice tidy list of what I’ve done that day, with only the current matter expanded and filing the screen.

I’ve uploaded an image showing items unfolded, and one showing only the last item unfolded. Normally my notes under each item are much longer, so the unfolded setup is much messier. 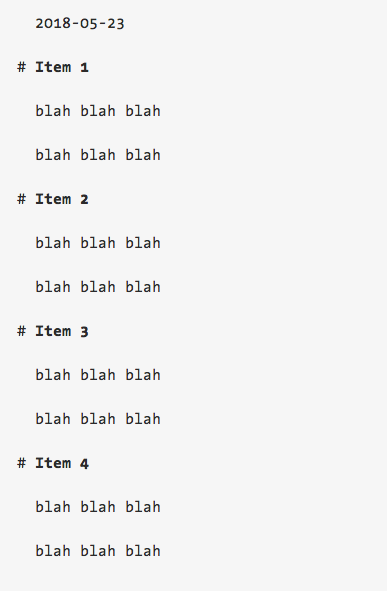 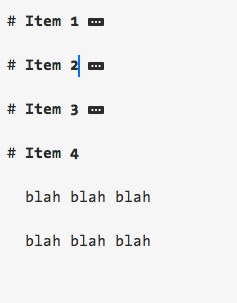 This was brought up back in the beta. While I’d also like to see this happen, there’s some non-standard text stuff that apps like Editorial use. This isn’t likely to happen for a while, if at all.

But it’s a great feature, so here’s hoping that one day it happens!

I think this functionality would be excellent too, if feasible and fits into the Drafts 5 dev plan/schedule (at some point).

In terms of Editorial, for all its legendary lack of developer updates, it STILL has the best ever mobile version of TaskPaper integration seen on iOS. Not only does it fold beautifully, the drag and drop tabs for each line are simply perfect for the syntax.

For MarkDown and Outline.

Then we can get rid of those Outline Apps… partly

I did not try coding in Drafts, but there, folding is great too!!!

I would also love to see foldable headers in Markdown!

+1 for this feature request!

Just came looking to see if this had been requested. 1+. Instead of dropping out to OmniOutliner I could round trip in Drafts. This feature would be

+1 for code folding, I’m not even a developer and I need it! So useful in many situations, massive differentiator, and I’ve seen this feature requested for many other similar text editors in the space.

Same here, I am using Omni Outliner to get this feature but as it is document based the sync is not as reliable as in other notes/text apps like Drafts.

Is there any chance that this will come or are there fundamental technical barriers ?

I’d love this feature so much. Especially with the new Taskpaper features…

I hope it happens!

I work on complex documents which have the form:

… and I would dearly appreciate being able to collapse the paragraphs under a heading. And even the comments under a paragraph.

This can be done in an outliner, but that comes with its own cost and awkwardness (copying in and out difficult) and we’d all far prefer to work in Drafts.

This would be a ‘killer feature’ if the programming challenges could be overcome!

I can see utility in collapsible headers, particularly if they can be dragged around and have their dependent content move with them. But then Arrange Mode could be used to do that.

(I happen to think Arrange Mode could be beefed up so that you can run a script where each line is a data structure element - from the Arrange Mode dialog.)

I write presentations in Markdown. Each slide is a Heading 3, 2, or 1. (Headings 2 and 1 have no attached content, most of the time. Heading 3 does have attached content - always.) Moving slides around would be particularly nice - by their headers.

I would think a “collapse all” capability - whether by gesture, button, or script - would be really nice. (As would “expand all”.)

+1 for code folding. I work on API documentation in Swagger OpenAPI JSON format (which supports MD), and currently edit in Xcode, but Xcode is too much and too cumbersome for stuff that’s not compilable. Unfortunately, anything without code folding capabilities is too little. Drafts has some really enticing features, especially Actions, but missing code folding is a deal breaker.

I also use Notion which does this fairly well.

But I’d rather do more in Drafts – a lot of reasons! but versatility would be high up there.

I’m not a coder, but long and complex writing needs ways of regaining the overview, and getting around. Folding does this, and jump anchors do this in another way… I would dearly love to see folding come to Drafts.

I would also love to see some sort of folding implemented. While I loved the functionality of the Folding Text app, I didn’t love the appearance and would prefer the more seemingly convention disclosure triangles used, like in Editorial as mentioned by @nahumck, or the unfilled/filled bullets that TaskPaper uses. This would, for me, double the value of the application. (I know the scriptability of Drafts sounds great, and I wish I could afford more time to play with the scripting functionality in Drafts, but I’m trying to juggle all too much elsewhere as it is.)

I agree. It would be delightful to have folding in both markdown and taskpaper files.

+1… a game-changer feature for those who want to use Drafts for long-form writing. I understand, however, that this might not be the priority use-case.

My second bite at this: I would think this is simulatable - with a well-crafted action. But really some form of built in “Collapsed Mode” or “Paragraph Mode” would be really nice. (Personally, as I said above, it could extend Arrange Mode.)

But I would imagine @agiletortoise has plenty on his plate, as it is.

I have to say as lovely as the folding feature is for editing the title I disagree that it would be my choice for Drafts.

We have many features in drafts that extend it to a editor like usage.

I for example use it for writing automation java scripts before putting them into an action block but that does not mean that a autocomplete should be integrated to Drafts.

I would be interested in the reason why Drafts is used as an editor on macOS. not that I am opposed to it only curious why not using for example VS Code.

On iOS it is a different story but the new FileAPI in iOS make trans-app editing possible.

A perfect example for that is Working Copy that manages my Library folder in the Drafts iCloud Sandbox.