Drafts 31.0 has been released:

Lots of general usability and interface and improvements, including updated icons, some button re-organization, and a variety of new features. Highlights:

This version introduces basic integration with the Notion online project management system. Notion’s API is still in beta but has become stable enough to start offering integration in Drafts. Be aware that aspects of this functionality may change or stop working if Notion makes changes in its API during the development process. We also plan to expand functionality based on feedback, so if you are using Drafts with Notion, please let us know other features you would like to see added. 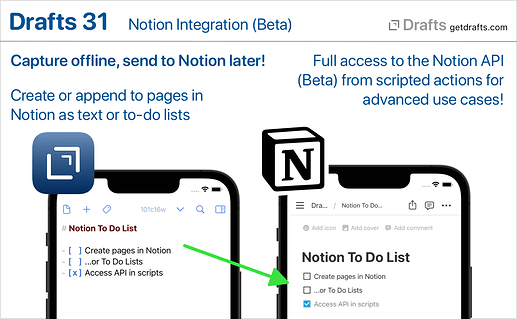 New “Maintenance” view in Settings/Preferences. This view is a home for completely optional periodic maintenance tasks to help restore defaults, clean up data you may no longer care about, or improve performance. Make sure you understand what the tasks do before running one because some are destructive and not reversible. Details on available tasks in the User Guide.

Other Changes and Updates

“Long press” is a hidden feature, therefore not easily discovered by users. Replacing a button with a long press is a particularly bad idea.

One of the minor but useful updates in this release to note, is the ability to access all your actions from the action bar, without having to swap out the group loaded in the bar. Great for accessing those infrequently used text manipulation actions and the like: Another noteworthy change, is the workspace menu (and action group menu) moving to the above this lists. This was an oft-requested change.

If you want access to quick workspace and action group switching at the bottom of the screen, you an enable workspace/action group bars in (…) list options. Note that the workspace/action group bars are now available in the Mac version as well: I just did the update on my MacBook Pro, and when I type to add a tag, whatever letter that I began typing changes to something else and there is no way for me to complete the tag word that I was trying to type.

The problem appears only when trying to enter a new tag when it starts with a letter combination that is not already in use. I have found that (as a workaround) starting to type the new tag name with a # at the start, completing the name that you want for the tag and then deleting the # does work. Also, if you type faster than the matching tag list can appear, it works successfully.

In the GIF below, I am entering test as a new tag (no tags in my current list start with test)

Got it, thanks. Will get out a hot fix.

I’ve been getting the following error when trying to run any ThoughtAsylum actions since the update: 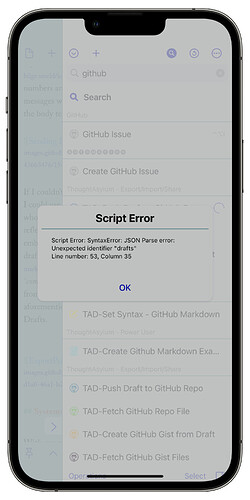 I’ve been getting the following error when trying to run any ThoughtAsylum actions since the update:

In the last couple of weeks, one user on Twitter flagged this to me, and another on the Drafts Slack group. It seems to have been intermittent and not even affecting all devices (running same versions) for one of the users. If I can reproduce it, I might be able to start closing in on what’s going on.

), so it should not be anything changing in there that has triggered this. But, I’ve been running the betas and it also hasn’t occurred for me just yet. In fact I’ve just downloaded the latest public release to my iPhone and tried a few actions there and I still don’t get any issues.

There is obviously something going on - there are three people who have reported the issue now. But, after looking at this over the last few weeks I’m drawing a blank on what to try next as to what I can do if I can’t reproduce it to investigate it.

Could there be any common factors (software/hardware versions, etc.) between you, @FlohGro, and richard.h from the Slack group (is that @richardh, or @RichardHanmer on this forum?), that are perhaps not prevalent to other users, or maybe there’s simply been a sharp decline in the number of people using the action groups and it is affecting most Drafts users?

Hi, Drafts 31 installed without a hitch on my MBP M1 but on my Mac Mini M1 it gets to 90% and will not complete. Any suggestions? Anyone else got this problem? TQ

Not an uncommon Mac App Store install glitch. Sometimes just a reboot and it will work, but the most reliable way to fix is to drag the existing installation of the app from the “Applications” folder to the trash, and try again.

Thank you, I just installed the “hot fix” and it’s now working like a charm!!

I followed your suggestion to drag the existing installation to the bin. The reinstall worked like a charm. Thanks for the helpful, timely, advice. Andy

Thank you for the detailed reply, Stephen. Is there anything I could do to help? I would send you my logs but I’m afraid TA actions are the only way I know of accessing them hehe.

Send me a DM on Twitter if you’d like - I’m @NeoYokel. I’d suggest email but I’m still getting used to Spark hehe.

I’ll also get back on the Slack group.

On iOS and iPadOS (haven’t checked Mac), having the following issues with find/replace.

Thanks, will take a look.

Am I just an idiot, or is it no longer possible to change the app icon on iOS?