I’m having trouble connecting thiss action goes Todoist. I have my Todoist API Token saved in Drafts’ Credentials option but it still isn’t working. Every time I try to run it -Failed gets added to the draft. I can use other actions that use the Todoist API without issue, but the QuickAdd v3 won’t work. I’m using an iPhone 11 running iOS 13.3 (if it matters or helps)

Not sure if @davenicholls wants to update that action, but it’s pretty old. It pre-dates Drafts having built-in Todoist support, I believe - and uses an API endpoint that Todoist has deprecated. I expect it would work if just updated to point to the new version of the API.

I see an option for “Reminder” in the built-in Drafts action-step but can’t figure out how to get it to add a reminder. I’m wanting to get a reminder either at the due time or 10 minutes before. I have tried “-0 Minutes” but that adds a reminder at the time I run the action, no 0 minutes before the due time. I have tried “Task Due Time”, “default”, etc with no luck. I realize this could be something on Todoist’s end but any info is appreciated.

@greg was right. It was an API version issue. I’ve pushed an update to the Action Directory, but it’s a single character change in the API call you just need to change the 7 to an 8.

Cool. Thanks. It working now

Finally, someone on the planet that has noticed this too:-)

I flagged this to Todoist support at the start of December. It took me several sets of email tennis to get them to acknowledge that there was a problem with the REST API.

I, like you, noticed that any natural language entry from Drafts, say, “paint door wed 9pm” would go into Todoist with the day/time, but not with an alarm/notification set, signified by the little alarm clock.

As I say, it took me many attempts to get Todoist support to acknowledge the issue. The last update I had (30 Dec) was that the relevant person was off and it would likely be resolved in “January.” I sent an email earlier this week to chase up, but have not heard back (par for the course for Todoist support). So hopefully it will get sorted soon.

At the moment, I just send the task names through to Todoist from Drafts until this is fixed.

This is how the same natural language entry differs via native Todoist and Drafts REST API. Notice the alarm clock is missing on the Drafts entry. 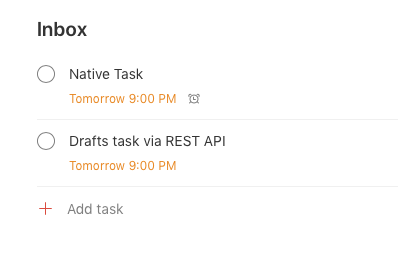 That’s what’s happening for me as well.

I’m pretty sure this is a bug Todoist has to fix. The quick task add API does not create the reminders like you would expect. The /task API can be used and has an auto_reminder property that makes Todoist create the reminders - but it does not do natural language parsing like the quick add API, so would not really be a good substitute.

They seem to have acknowledged it as being an issue on their side, once they grasped it not working as you could reasonably expect. As per the above, hope it gets fixed, but not overly-confident it will happen any time soon.

I’m convinced that something changed in the last few months on Todoist’s end. I’m almost sure that tasks with date/time didn’t used to show the little alarm clock, even when created natively. However, they would still ping a notification if you had the appropriate configuration in settings.

It was the case that alarm clocks would only appear against tasks which you had manually set an extra reminder for i.e., as a prompt some time ahead of the due date.

Incidentally, around November time, Todoist added another criteria for setting a reminder. It used to be either ‘at x date, y time’ or location. You can now also opt for ‘x timeframe before task due date’ if there is a date/time already set for the task. This was just a stealth change; no real mention of it anywhere.

Final point on this, the reason I became aware of the issue was because, suddenly, I wasn’t getting notifications coming through, even for some long-standing repeating date/time tasks. They had obviously been pinging notifications before. An example was a weekly task that had been created back in 2016; the task didn’t have an alarm clock next to it upon checking.

To ensure that I didn’t get caught again, I created a filter to list all repeating, and then re-keyed the task and ‘repeat cycle/time’ to ensure they all had an auto-generated alarm clock next to them, thus ensuring they conformed to the ‘new’ methodology going forward.

So whether those tasks that fell through the cracks were originally created via the API and hadn’t been ‘upgraded,’ I’m not sure. Whichever way you skin it, something screwy has been happening on Todoist’s side.

This is bringing back some memories. As @agiletortoise said earlier in the thread, I created this action before Drafts had built in support but I carried on using it because of reminders. The Quick Add API call requires you to separate the reminder part (and the notes part). In the action it works for specific times, but I haven’t been able to find a syntax for times relative to the due time.

This seems to be the same for the Todoist app and website. It does recognise things line “10 minutes before” but it seems to apply it to the due time rather than adding a separate reminder

I’ve followed up several times this month with Todoist, but only today got any kind of a response. Here’s the timeline I’ve been given:

I’ve been advised that I should get an update on Fri (31 Jan) from Todoist Support in terms of next steps to save me chasing. I’ll obviously pursue if I don’t hear back.

So in summary, 8 weeks after first reporting, fingers crossed, we’ll get some tangibles on when this will likely be resolved.

Thanks for following up. Sounds like they are working on it.

I got this back:

UPDATE: The issue has now been been fully resolved and the reminder will be created as expected.

But, if you try it with Drafts, it hasn’t.

I got that same response. I’ve tried it with Drafts and Fantastical 3 and no reminder is created.

Can you give me an example that works in Todoist, but not in Drafts using the action?

I’m not sure if I’ll be able to do anything, because it might still be an API issue, but I’ll have a look

It’s not an issue with the action but the API. Todoist was supposed to make a change that would create a reminder when adding a task via the QuickAdd API but so far it isn’t working.