I installed the static versions of the iA Fonts, iA Writer Duo and iA Writer Quattro, on my iPhone using Fontcase.

iA Writer Duo works as expected in Drafts. However, iA Writer Quattro always defaults in Drafts to its bold variant, even though all four variants (Regular, Italic, Bold, and Bold Italic) are verifiably installed by the Fontcase profile.

This is a minor issue, of course. But iA Writer Quattro is designed for the limited screen width of smaller devices, making it a nice custom font choice for Drafts on iPhone. If this is indeed a Drafts issue and not an iOS issue, it would be lovely to see it fixed.

Which file(s) did you install, could you list them by name?

Here’s a screenshot of all the fonts I installed using Fontcase. 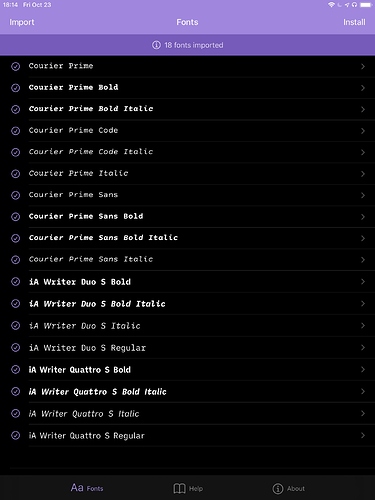 I can confirm I have the same issue. If only Quattro regular is installed, then it is used. As soon as the bold version is installed, it supersdd red es everything.
Otoh - thanks for pointing out FontCase…

I thought I had answered this elsewhere before, but can’t find that response at the moment. I’m not sure how the iaWriter fonts are packaged, but there is something about them that does not allow iOS to properly identify the variants in the family.

Drafts uses system methods to work with fonts. The iOS picker is used to select font family, and UIFont/NSAttributedString methods to render the fonts. If the “bold” variant is showing up, then it’s because iOS thinks that is the regular variant for that font.

Not much I can do about that. I don’t know much about the mechanics of how fonts are packaged and the variants identified under the hood - most font families seem to work fine, but some do not. I tried in the past to have some additional logic in there to work around these issues by doing hacky things like trying to read the font names and look for words like “bold”, “heavy”, but it was wonky and not very accurate.

I had a similar issue, seems to be caused by typo in meta data of ttf:

But he seems not be active on the github …

all commits are older that two years.
maybe someone else will be able to fix the font OR another similar font may be found.

did you find a solution?

or did you get a reply by the font creator?

+1 Would love an update from anyone who’s been able to get the Quattro font to work on iOS! I’ve been using the Monospaced version in the meantime, but I definitely miss the feel of Quattro!

Is there any chance that anyone has tried contacting them via their support e-mail address?

We take a break on the weekends (JST), but during weekdays we aim to reply within 1-2 business days. If you are experiencing a problem that our support section doesn’t solve please reach out to us!

Details of the general information they require can be found on the support page.

While there is obviously the issue on the GitHub repo, that repo does not look to be actively maintained at the moment. Probably because a font is generally pretty stable and they don’t use GitHub much, or the developer for that may have moved on from the organisation, etc. However, the general app support for iA Writer would seem a good next step.

I note also that the repo just seems to be the final font files. I don’t see any font generation resources in the repo, so I think it would have to be the creators who fix it unless someone fancies rebuilding the font from scratch. Well, almost scratch, the IBM Plex font resources it is based on are available.

Failing that, the iA Write folks do look to be active on their Subreddit (https://www.reddit.com/r/iawriter), but I don’t see any current mention of Quattro font issues on their, and that might be another avenue to pursue if the e-mail support does not pan out.

Failing that, I’m sure there are alternatives out there that people could find equally as good and will not suffer from this issue.

FYI, the IBM Plex fonts work great with Drafts…they do not exhibit these issues in the way they are packaged.