Drafts 19.2 (macOS) has been released in the Mac App Store, details below.

What’s this feature? Tried keyboard combo yet can’t figure out?

See below…the “Open” button is new. Does the same as the “Save” button, but opens the app to the new draft, in case you want to immediately act on it. 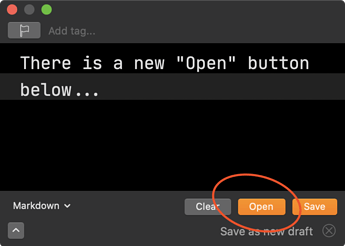 Just curious, but the circle with a cross on it, bottom-right. Is this supposed to be clickable/actionable? I can’t make it do anything and am always a little quizzical as to why it’s there. The tool tip just says “Clear selected draft.”

If you expand the capture window, you can select a draft as a target to append/prepend the text. That (x) button unselects that draft and returns to “new draft” mode.

Ah, OK. Thanks. Never use that on the Mac.