An Alfred Workflow for Drafts

Wanted to flag that the Doctor Drafts documentation suggests two different ways of installing Python3. And one of them at least doesn’t seem to be working for me. The install page on the web site links to a 2021 page recommending the official python.org installer, and specifically recommends against using homebrew. The diagnostic page that comes up when you run drdiag within Alfred links to an older post that describes using homebrew (and pyenv) and specifically recommends against using the python.org installer. I admit I am well out of my depth here, but these suggestions seem to be in contradiction with one another.

For my part, I used the python.org installer as recommended on the Doctor Draft web site install page, and while I can access Python3 from the terminal and run a print command to test it, Doctor Drafts commands still aren’t working for me, and drdiag tells me it can’t find Python3. Still troubleshooting that.

Thanks for flagging the inconsistency, I’ll take a look at aligning them.

The unfortunate truth of Python set up is often visualised by the excellent XKCD illustration. 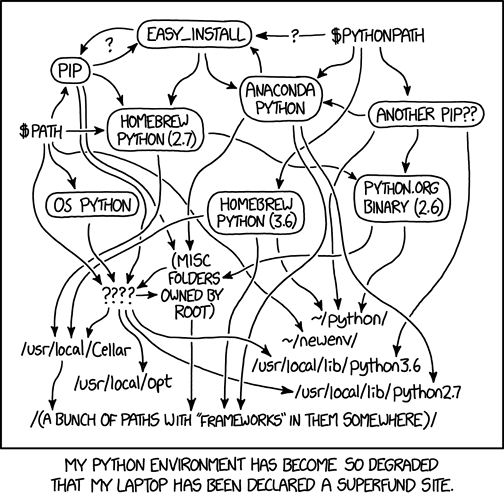 I have installed/uninstalled/reinstalled Python a handful of times in different ways. I got them all working by hook or by crook … eventually

The one I have personally had the most success with is the Homebrew and Pyenv approach.

What I might take a go at is putting together a set of instructions based on that to go on the site and then link off to other resources should people have any issues on their system.

The python.org installer did eventually work for me - there was a problem with my Xcode command line installation, apparently, because when I reinstalled that, drdiag found python3 and now the full suite of dr commands is functional.

v1.7.0 is now available. This includes a new way of triggering the Python-script-driven functionality. I’m hoping it will prove to be more resilient and allow for even easier set-up as a result.

There are new Python 3 installation instructions on the website (linked to if you have Python 3 issues found by drdiag. This is now run automatically if there is an issue running a Python script - giving what is in effect both useful and actionable information about an error.

There is also a new quick access checker (drpyver) for checking the version of Python that Doctor Drafts will attempt to use to run Python scripts. Mainly for my use in developing this change and testing various configurations that switched around my Python version.

I didn’t get any feedback on beta testing of this, so I’m going a little blind on something that has a lot of what ifs and caveats associated with it. I guess we’ll see how close I got as people start to pick up the update and use it.

It includes a fix as notified by @Richard_Cool, as well as a few additions to the diagnostics and a new option to copy a workspace’s URL to the clipboard.

I have also deprecated the Drafts beta related flows as Drafts beta testing on macOS is now managed via Testflight. Launching these will now take you to the beta programme page.

v1.9.0 of Doctor Drafts is now available at doctordrafts.thoughtasylum.com.

The new update includes explicit support for URL handlers (Alfred v5) on many of the external call triggers meaning you can call a big chunk of functionality from URLs. In addition, there is a fix for appending flows where a used UUID was not always being reset (and it should have been).

Because I have added this, this latest release is officially only compatible with Alfred v5, but anyone still on v4 is welcome to try it (I have not). You can alwsys download any release version from the links in the change log if you need to revert to the previous version.

To accompany the URL handling, I’ve also updated all the documentation of the flows based on external call triggers with example AppleScript code and URLs. The documentation is available on the website.

I have also updated the Drafts scripting (including beta) and user guide links used by some of the flows. These are maintained in separate online files, so these are also available to users on earlier versions - I just happen to have spent a bit of time doing all these housekeeping updates.

Enjoy the update, and of course, there is also more in the pipeline

v1.10.0 of Doctor Drafts was released at the weekend.

The main change is that the environment variables have been transitioned to user configuration options, so you’ll be able to more readily review and change these in Alfred 5. There are also some more behind the scenes changes. 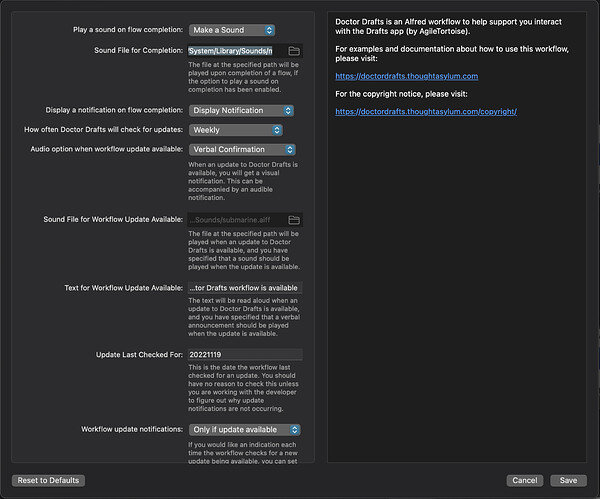 The update was mainly driven by the upcoming Alfred workflow gallery, and prepping the workflow to (hopefully) be included.

If anyone spots any issues in this new release, please post the details back here.