I wanted to draw people’s attention to a change Apple has made to watchOS in the current 8.1 betas.

In the watchOS 8.1 beta, input always defaults to scribble. So to dictate on your watch, you always have to tap an additional time on a mic button at the bottom right.

I reported this issue to Apple (FB9685074) and have been told this is not a bug, but an intentional behavior change.

There are no APIs to control this behavior, so that means dictation with Drafts will always required at least two taps, instead of just one. Maybe not huge, but not convenient for capture - and the same will be true for any dictation (in Messages, etc.) on the watch if this change sticks.

I’m drawing attention to the change because I know it’s going to generate a lot of support tickets for me if it ships this way - so maybe there’s still time to change Apple’s mind about this before 8.1 ships. Please file Feedback in the Feedback Assistant if you feel strongly about this being a bad productivity change. You can mention my feedback for details (FB9685074). 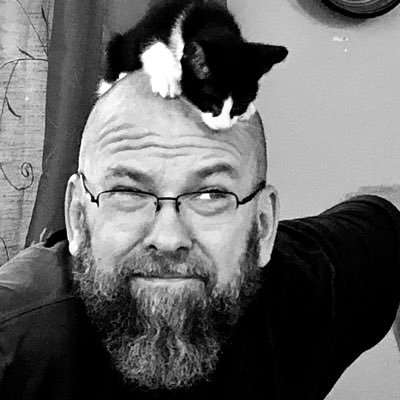 @agiletortoise
🚨If you dictate on Apple Watch: All input on watchOS 8.1 beta *defaults to scribble*, requiring an extra tap for dictation. Apple says this is an intentional change from 8.0, which remembers your last used mode. File feedback! (Dupe: FB9685074) https://t.co/TAsfKRL6qu 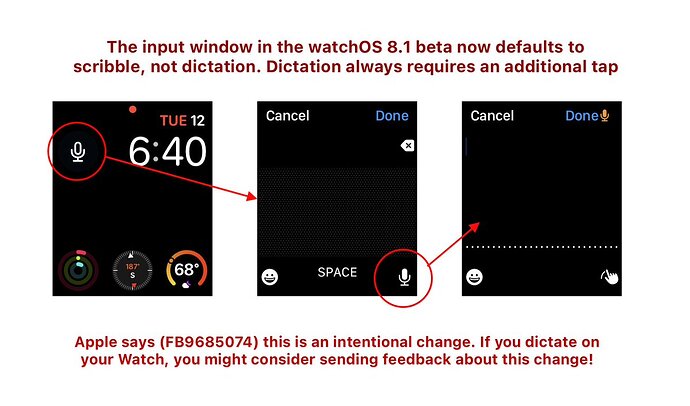 To follow up on this item, this change to Apple Watch behavior is still in watchOS 8.1 RC, which means Apple will be shipping it. So, if you dictate on your Apple Watch, expect it to take at least two taps (in Drafts, or anything else - replying to Messages, etc.) to get to dictation after updating when 8.1 ships next week.

Is there a way to workaround it with Siri Shortcuts?

Guess I’ve got to suck it up and change the microphone icon on the complication/button. Really hoped they’d rollback this change.

This sucks and greatly diminishes the ability to quickly capture idea on your watch.

I am confused after reading this post and the replies. I have watchOS 8.1 and am now required to click twice before voice dictating a note. Is there a workaround? Someone mentioned changing the complication to the microphone but that is what I have and it still defaults to scribble text. Any other ideas?

I literally discovered Drafts today (11/29) after years of searching for the most friction-free capture device, only to find my attempt thwarted yet again …

There is no workaround at this time. Apple would need to make a change. It is not possible for a third-party developer to open text input directly to dictation on watchOS 8.1.

(All versions of watchOS prior to watchOS 8 this was possible, and was how Drafts complication worked)

Please do complain to Apple about this change!

This is driving me mad

Is it worth replacing the built in input control with a custom dictation view using SFSpeechRecognizer? This might also enable you to stop listening after speech ends, so the user doesn’t have to press the done button.

If that were feasible it could be a trigger for automation. Something like “now you’ve captured the text do this”. Maybe tag it with “Captain’s Log Star Date…”

Braintoss has dictation-only input. Could a complication shortcut be made to go into such a mode? Personally, I’m not interested in the other input methods.

To the best of my understanding, Braintoss does not do “dictation”. It records audio, and later processes it with speech recognition (Maybe on the phone? Maybe in the cloud, not sure). So it is a bit different.

Never say never, but Drafts is probably not going to add direct audio recording. It’s a bit of a different animal than we specialize in, and there are other apps like Braintoss and Just Press Record that focus on audio.

Thinking more on this…

Either of these would have the effect of dictated text being properly post-processed (and would do the same for text grabbed some other way by Drafts).

I have submitted feedback to Apple and hope others will do the same. I realize it is just one more step to get to dictate, but it is an inconvenience. Thanks to @agiletortoise for making us aware of the issue. I had thought it may have been a Drafts decision, which made no sense to me, but out of respect had said nothing.

It did make for an interesting weekend project.

But I have a little more work to do on it before I’m prepared to share. But so far I have three functions, actually 4…

The latter either adds a link back to the draft in the task’s Notes field or deletes the original draft.

The above for drafts you select from a Prompt dialog.

It needs more work, as I say. It’s intended to be something people adapt rather than adopt blindly. And I expect it’s a re-invention of something some people have already invented.

But anyhow I have a basis for scooping up drafts dictated on my watch - or otherwise entered Untagged.

If you would be so kind, please share your Draft action for this, even if still in draft form. I think I follow what you are doing, but I don’t see how this allows for one tap dictation from the Drafts complication.

FWIW, I also filed a second complaint about this on the Apple Watch Feedback forum. Unfortunately, this seems to be falling on deaf ears at Apple—at least for now.

I haven’t tried WatchOS 9. Is this behaviour fixed in WatchOS 9?

The behaviour remains the same.

Added my vote via the Apple Feedback Form; unfortunately, my usage of the complication has dropped to zero since this change. 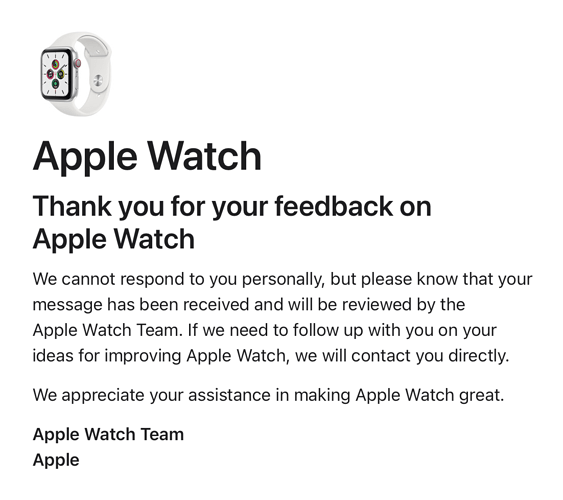