Where is the ist of keyboard shortcuts

I can t find the list of keyboard shortcuts

. proper to drafts ie the shortcuts already active after a new installation.

Groups > Manage > Tap on a group > Tap on actions

…you will then see a list of actions within the group, and any that have keyboard shortcuts assigned to them will be shown on the right-hand side of the list.

yes, thank you. I had seen that, but I would like to print a list of shortcuts. The method you suggest is a bit tedious. There must be a printable list of shortcuts somewhere. All apps have it.
thanks again for your time and kind help

The way I did it (make a printable list) was to take a screenshot of each of the respective shortcut pop ups and then, using Textgrabber, extracted the text and made a reference draft in Drafts. I’m not aware of another way, but am sure someone will chime in if there is.

There must be a printable list of shortcuts somewhere. All apps have it.

As advised, the app offers lists via the functionality described. Printing is actually occurring less and less and has never been prolific from mobile devices. I would say few rather than all apps have a printable list.

The fact that Drafts is so customisable means that anything but a generated list would likely be inaccurate for all but those just starting out with the app.

thanks you. You are right

Yes, you are right, but in addition to actions, there must be drafts intrinsic shortcuts. I will look and give you a follow.
thanks once again

There certainly are for navigation, New drafts, etc.; but I think most if not all can be overridden meaning that the methods outlined by @TDK_SA90 would always be the most accurate. 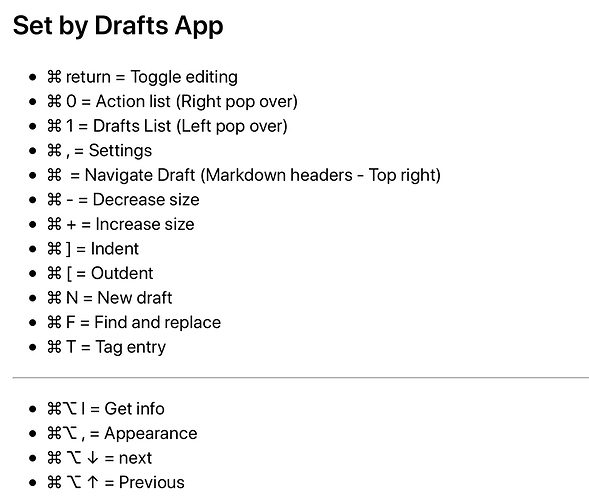 One internal (proper to the app) action that I often use is manage. I asked drafts support and there is no shortcut. 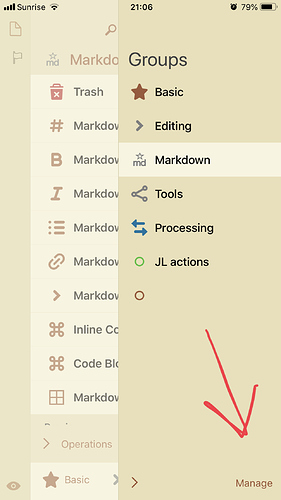 Yes, I’m aware of keycue on Mac and there was another one I used to use years ago. Nothing comparable on iOS though.

do you know the karabiner-elements app ?