The possibility to export notes including meta data.

(Sorry if I have missed something and I think this is already possible if you create an action but would like a native method available in both iOS and OSX.)

I click the ‘i’ button (top-left) to copy a draft. It’s a slight annoyance that I then have to slide the box up to get the row with ‘contents UUID Link’ into view in order to do the copy. At least this is my experience on iPad Mini with software keyboard active. Could this row just be moved to the top?

On an external keyboard, when using the down arrow to move through a list of drafts, it would be really good if you could move further down (i.e., scroll through) than only what’s shown on screen. This is particularly confusing as the “active draft” keeps changing when you’ve gone down below the bottom of the screen. Keyboard support is otherwise great, but this for me, sticks out like a sore thumb.

Finally, I’d welcome the opportunity to be able to set how long the action list “search” persists for. At present, it runs for perpetuity. Would nice to have the option/s for this to reset automatically rather than having to tap on the tiny ‘x’ each time after use.

You can dismiss my suggestion if it is not easy to implement. The export funktion from Drafts on iOS to csv works just perfect (including time and place and other metadata) and I have no problem exporting data that way. I just missed this option on OSX even though text of the content is very useful.

Sometimes I run actions that don’t act on the current draft (e.g. do something with the clipboard, create a new draft from a template and work on that, etc) and it’s weird to see that listed on whatever draft happened to be current at the time.

If I understand what you are asking for, I think that you already can display a creation date in the Workspace’s draft listing.

If I switch the Accessed/Created/Modified/Text option under each ‘folder’ for a Workspace, it changes what is displayed in the list. 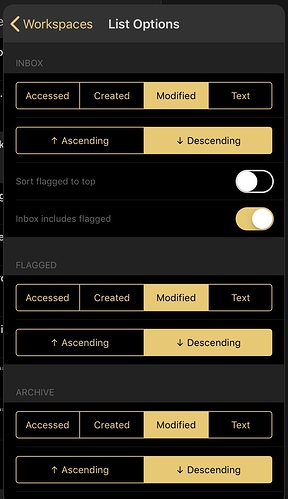 Is that what you are looking for?

Y’know what, nevermind. I just found the toggle to show/hide the last action so this request is moot. That takes care of what I needed.

Pull down on the text of the current draft to activate the search bar.

On an external keyboard, pressing the Tab key after making a bullet simply creates Tab spacing. It would be nice if pressing Tab would indent the bullet and Shift+Tab would “outdent”—as a faster way to create list levels. I know there are included keyboard shortcuts for indent and outdent, but I find simply pressing Tab more intuitive.

Indents and outdents are things that are done with actions. By default, Drafts ships with indent/outdent actions in the “Keyboard-Basic” group assigned to the external keyboard shortcuts ⌘-[ and ⌘-] - which are common shortcuts for indent/outdent in many text editors. I know you mentioned knowing about these, but adding explanation for others.

Technically, you could edit these actions and re-assign them to tab/shift-tab - but I would not recommend that because it would make it impossible to actually insert a tab character. If you are OK with that, it is possible. You have to copy a tab character and paste it in the shortcut editor in the action because iOS will not let you type a tab in a text field.

I often use Drafts with my iPad in landscape mode with the draft list pinned open on the left. It would be nice if opening the action list didn’t automatically close the draft list every time. This has been especially noticeable to me recently, while testing out a scripting action I’m working on. When going back and forth between the editor and making changes to the action, it makes me reopen the draft list a lot.

THIS! I have the 12.9" iPad Pro and also use it primarily in landscape mode which is more than big enough to have both the draft and action list open and not encroach on the draft itself. It would be nice for larger screens if we could just have both open. The switching back and forth is very doable…but causes unnecessary frustration.

My work around has been to create a master action that queries my main action list. I then run the master action and just choose the actual action I want to run. But it’s not terribly elegant especially as my list of custom actions continues to grow.

Just seen a change in the latest beta to address this

Maybe this is just me, but perhaps there could be some UI tweaks to better identify options with workspaces. I like the concept, but how to set up a new workspace does not appear to be as obvious as it could be.

Also, I don’t know how small this is, but I’d love to see the Shortcuts integration of Drafts include the ability to add tags to a draft. Currently, I think the only way to do that is to use the good ol’ x-callback-url. Thanks!

I’m 99.9% sure that’s something we need the Shortcuts team to implement - I have filed a radar on that, and if you’re not on a beta iOS I suggest you go to apple.com/feedback to let them know you’d like to see it too

I remembered one more: a script method for pinning the draft or action drawer. this would make loading a workspace + action group even better.

Certainly did not get them all, but addressed a number of the items in this thread in the 5.5.1 release. Enjoy!