What is the difference between Drafts Pro for Mac and Drafts Capture?

I got a Drafts Pro subscription which works on my MacBook and my IPad. I also subscribed to Drafts Capture app on my iPhone.

How does Drafts Pro (Mac/IPad) work with Drafts Capture (IPhone)?

Drafts has two versions, an iOS version, which runs on iPhone, iPad and includes an Apple Watch app, and a Mac version.

The Mac version is recent and not quite as full-featured as the iOS version (which has more powerful automation actions which are not yet shipping in the Mac version), but, yes, they are both part of the Drafts family and sync data across all versions with iCloud.

Both have a free version, and a Pro subscription, which unlocks advanced features. Information about Drafts Pro.

Pro can be purchased on either iOS or Mac, and a single subscription on either platform can be shared through your iCloud account.

So, which subscription should I cancel as I do not want to pay £18.49 for Drafts Pro. Then a further amount for Drafts Capture. Grateful for your advice. Thanks, Shane 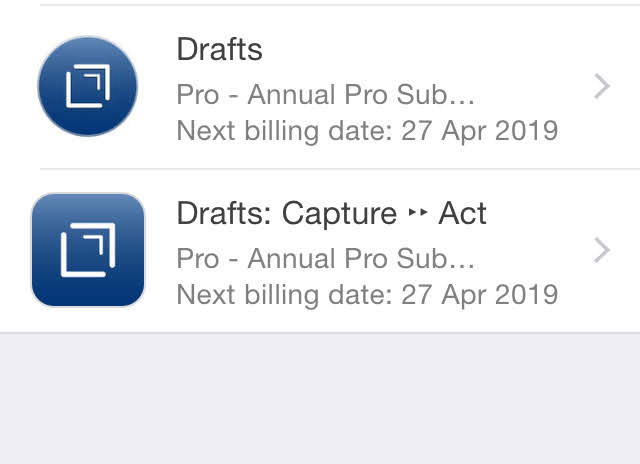 It shouldn’t matter which one as they are both the same - look at the second line of each entry. The top line is the app store title of the app you bought the subscription through.

Thanks @sylumer , money is a bit tight for me at the moment so need to make sure I am spending it well. Thanks for reply it helps.