Uses and workflows: an actions launcher

I’m thinking about posting some short notes on some of the key Drafts actions I use, with the hope of interrogating my own workflows and maybe gaining from feedback/dialogue. This is a quick starter to see if the thought has any legs.

I have an action named Launch that sits at the top of my Primary action group. It’s just a prompt step with 6 options… 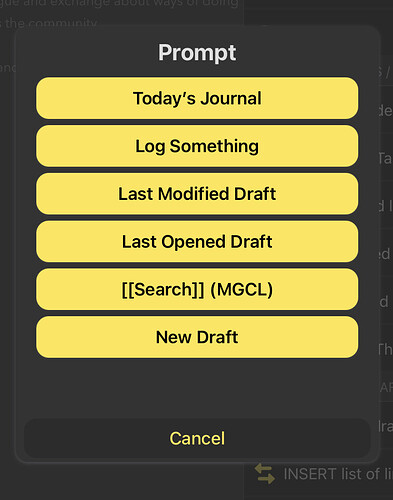 …followed by a URL step:

The options have changed slightly over time but I generally stick with no more than six in order to reduce hunting during selection. The options are mostly obvious functions; I might detail one or two of the less obvious ones in other posts. I launch this from a home screen shortcut in my dock, placed there so it’s available from within any app with a swipe up from the bottom of my screen on iOS.

Reviewing this, it occurred to me that I had originally set the home screen shortcut up through a generator so it would launch Drafts (using a Safari url launcher) without having to load and visibly pass through Shortcuts first. It seems Shortcuts has become much more efficient and cleaner at running these kinds of launchers from the homescreen since then. Switching back to a simple “Run action … with” shortcut step shaves off a little loading time, and makes Drafts feel even more like an extension of the OS.

Looking forward to hearing from anyone else doing anything similar. An obvious comparison might be with Drafts’ grid widgets, but beyond some issues I’ve been having with widgets recently, the idea of having a launcher shortcut on the dock seems more readily available everywhere…