so similar to what i achieved a few months ago in Drafts on the mac, i would like to create a similar workflow on iOS (mainly for my ipad)

to start the way i use this on a mac makes it very easy to integrate images within draft+markdown: i capture images via system capture/snagit, then save in a easy to access dropbox folder.
i then have a hazel rule that renames this file and creates a link with a accessible URL and a proper MD file:

this generates a link that i can easily paste in drafts and view, ie 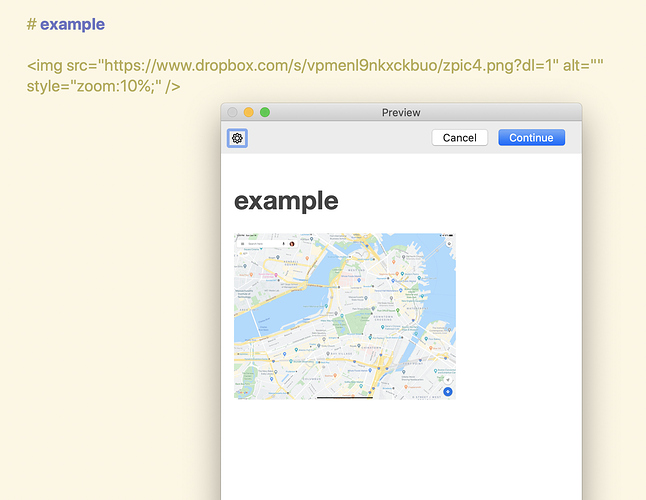 been using in for several months and its great!

now im trying to mimic this in iOS…and running into several blocks: i cant use hazel to get a link for the dropbox new image and generate a link to paste into drafts easily. I have managed to manually convert the copied image link from dropbox into a MD link via shortcuts: 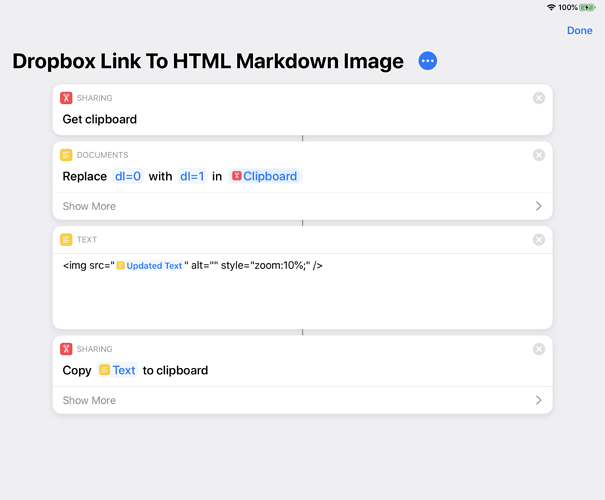 so wondering if the community has any advice on ways to tackle this, i don’t mind using other method or an internal drafts way

any thoughts on this anyone?

What you described in the original post seemed to be:

You can’t run Hazel on i*OS and there is no equivalent. To get the file link you’ll either have to get it manually from the Dropbox i*OS app, write your own link request, or if your Mac is on, you could presumably get it from the shared clipboard, or from a file you could have the Mac write (last_dropbox_link.txt).

For your own link request, you could utilise Draft’s Dropbox integration and direct API calls to identify the file and generate a link. This StackOverflow post’s second answer describes some API options around that.

Dropbox API: How to use API to get file's shared link?

Is that what you want to know? The underlying question isn’t clear to me I’m afraid.

thx @sylumer, that’s exactly what i wanted, you understood correctly!

ill explore some of the methods you suggested, thx a lot!

If you work this out, I’d be glad to know what you did. Thanks in advance!

Don’t know if this will be helpful, but I just made this shortcut for my own use and really like it. Super simple here but does the trick. Gives you a photo selection dialogue. Your choice goes to Dropbox, it grabs the link and formats and takes you back to Drafts with the formatted link in the clipboard. Once you’re back in Drafts just paste.

wow this is fantastic thx so much @jarno527!

If I don’t want to use Dropbox for this shortcut, and I want to use iCloud instead, what should I do?