Hello there everyone, and specifically @agiletortoise ! Thank you for this incredible app. As David Sparks always says, Drafts is the poster child for the power of subscriptions and I gladly pay my annual amount.

I say all that because I’m in software, too (on the customer success side of a b2b platform), and I normally just hear about how it all sucks vs the benefits it provides. I don’t want my request to be construed that way!

SO - enough preamble. I would love it if it was possible to add toggles to the seperators in the Action List. I would love to have ONE action list (I break mine done by the specific way I’m using Drafts - I have a Writing list, for example, and a Productivity one, etc.) But, obviously, there are some actions that would be great in all of them (indent, for example, when I’m working on my phone.) I realize I can copy and move it into each list, but I would love the minimalist view of one action list where I could close toggle all the other sections, but if I needed an action (like the indent example), I could just click on the toggle to the section, then run it.

Not a huge deal, and in the grand scheme of things, it probably saves a click or two. But I would love that option!

As your action list grows, you could end up in a situation where you have more toggle closed sections visible than actions and have to scroll to them. That doesn’t seem particularly minimal to me, so I would.like to propose an alternative that iI think is more minimal, better for maintenance, and works within the feature set.

It s based on an action step that allows you to run another action immediately - include action. You can have your prime action in an action group, then other action groups can contain secondary actions that will “call” that action by simply I clouding it by name. You can keep each specialist action group absolutely minimal and still have just a single action to maintain.

I would also recommend tying the action group to workspaces so you can quickly shift your needs between modes of work that also focuses to the drafts you would be interested in and can set other aspects of the app interface accordingly.

I believe that this approach would reduce your clutter through closed sections taking up space, keep you to a single action containing all of the processing commands, give you the option to tie into workspaces for more efficient mode switching, and work within the existing structures.

Would this suggestion be a viable approach for you?

Did you know you can (on iOS):

Can you expand on everything that you’ve suggested in this post?

I am not so sure that I can. It is already pretty expansive by my understanding of what I was trying to outline. What detail are you missing?

@sylumer Thanks for the response! I tried adding it to a couple of actions, and I kept getting an error message. I should also advise that I know juuuust enough coding to seriously screw things up. I often make copies of actions so I can play with the scripts and see what happens.

Conceptually, how does this Action work? So, for example, I often up a Draft using the Open with Template action for journaling that I will then use the Append To Draft action to move to a master entry.

How would the action work in that workflow?

@agiletortoise I didn’t know about long holding! I have started searching for the actions, which is nice. Any thing like that for the MacOS yet?

The actions menu in the main menu is the equivalent on Mac.

Conceptually, how does this Action work?

You create a “Post to Twitter” action. you add the “Include Action” step I suggested above, and set the name of the action to be “Tweet”. 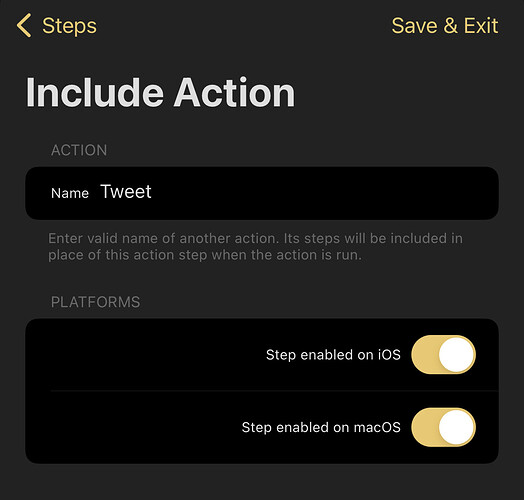 Running the “Post to Twitter” action does one thing. It runs the “Tweet” action. Zero coding knowledge required - just one standard Drafts action step, and it is the equal easiest action step to use; just type in the name of the action to run/include, and you’re done.

I would also recommend tying the action group to workspaces so you can quickly shift your needs between modes of work that also focuses to the drafts you would be interested in and can set other aspects of the app interface accordingly.

How does this work? And the paragraph above this one as well. They are two separate suggestions, I assume.

The paragraph previous to that (as per your reference) is all about the include action step (described above). If you are unfamiliar with that action step, I linked to the documentation for it in my previous post on this thread which provides a worked example.

Got it, thanks for the clarification.

If I am understanding this correctly, it sounds like this allows me to “recreate” an action with a new name. If that’s the case, I normally just duplicate and rename whatever action I am needing then moving it to the appropriate action group.

So, in your example, I would duplicate Tweet, rename it Send To Twitter, and move it to the Social group.

Is this more or less what you were implying?

I found it right after I sent that message and felt like a dumb dumb.

If I am understanding this correctly, it sounds like this allows me to “recreate” an action with a new name. If that’s the case, I normally just duplicate and rename whatever action I am needing then moving it to the appropriate action group.

No. It does not duplicate the original action. It creates a new trigger for that action that you can place in a new action group. Thus you could have the same action be triggered from say five different action groups. However, if you wanted to change it, rather than changing it in five places, you just change one and the other four continue to call that one, and all therefore get the update.

Duplication of actions, in my opinion, should only be for the purposes of taking a copy when some change is going to be made and you wish to keep the original as well.

So, in your example, I would duplicate Tweet, rename it Send To Twitter, and move it to the Social group.

Is this more or less what you were implying?

These custom slimmed down groups would give you the most minimal views of actions possible, tied to what you need at that time. No toggling of action list separators required, which when toggled would simply add clutter to your action group.

For anyone thinking this sounds familiar; yes it is the exact same set up I have always recommended for using for the ThoughtAsylum action groups (which effectively function as the uber list of actions in the scenario above).

AH! I gotcha. So, if the original Tweet action has 5 steps in it, by using Include Action, I don’t need to recreate the entire action sequence. AND, to your point, if I need to tweak it, I wouldn’t have to manually go and change them (like what would happen if I made copies.)

I can totally see what you’re saying and how this might solve my ask. Thank you so much for your patience and kindness in helping me work through it. I tried the ThoughtAsylum Action Group when I was first really delving into Draft’s powers and it was
over my head. I’m excited to give it another whirl.

Thank you, also, for all the other coding gifts you give. I currently use your Alfred Shortcuts bypass, too.