I created some (customizable) actions to add tasks to todoist inbox. This Action Group https://actions.getdrafts.com/g/1HK contains my most used ones. Feel free to use them or cuztomize them for your needs.
You’ll need your todoist api token and insert it into the scripts you want to use (get this token from the webinterface in settings under integrations)

let’s collect some of the most needed and used actions together!

Great collection, thanks for sharing!

I updated the group and simplified some code.

Now you don’t need to put your token into every single action - just in two actions which are included in the others to submit the task.
The two new actions require a taskString/taskStringList and will submit one/multiple Tasks

Hi, I’m looking for a script that would allow me to add multiple items onto a (shared) shopping list in todoist

I want to be able to add multiple items in one go and for them to appear as separate list items.

Can’t figure out how to achieve what I’m after.

Many thanks, look forward to your input (so much so I have just registered on this forum just so I can sort it out)

If you look in the Action directory there are already a lot of Todoist actions in there.

If you look at any of the ones processing multiple lines, you can either use the Todoist syntax for your shopping list project or suffix it to each line being processed in one of those scripts.

Thank you, but that doesn’t help because I don’t know how to append it.

But there isn’t anything obvious that calls out which list to add it to. For context I’m not a developer, I’m just an advanced user that could tinker with code if it’s obvious. Alas it isn’t.

One of the other actions noted (as does the Todoist documentation) that if you use the hash syntax, you can specify a project inline with the task. That’s what I was referring to above.

Let’s say for example I have a project called “Shopping”. If I have a shopping list like this:

But that’s an overhead we don’t need. We could have the script do that.

This is the script step from the action you referenced above. I’ve made two changes.

One is to create a new constant called project. I’ve set it to be shopping. This is simply a way to put at the top of the code the name of the project I want to add to.

Next I amended the line containing todoist.quickAdd. I appended a space, a hash, and the project to the line variable it is being passed to create a task in Todoist. This is replicating automatically me adding the hash syntax project to every line in the draft at the point of processing.

I ran a quick test and it worked for me.

Does that make sense?

Yes this is exactly it!!! Thank you!

This doesn’t seem to work if your supplies replenishment project is called “Shopping list,” though. By this, I mean, simply adding “list” into the quotes above, means that when the action runs, you het multiple lines in the todoist inbox, with the items you submitted, but each followed by ‘#Shopping list.’

So, what would need to be done to accommodate multi-word project titles to get the above to run in the same manner? I have managed to get it to work, as expected, with single-word projects. Cheers.

Correct. That isn’t how the quick add works, but you have to check the Todoist API documentation to find that quick add does not accept spaces in project names. 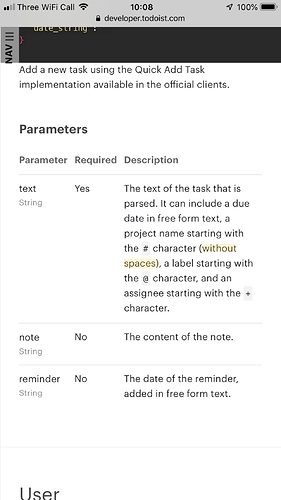 That means you can’t use the “convenience” function approach, which for a pre-set shopping list isn’t a big deal, as you probably don’t need to be setting relative priorities, etc. against items.

So swap out the quickAdd function for createTask and populate the project_id with the unique ID of your project, not the name.

I tested this with my “Alexa Shopping List” project and it worked fine. Just remember it isn’t going to convert any of the quick task syntax, you have to manually work that in with this function.

Great stuff. Got this working my end too. Thanks for tour help on this.

the action group will receive a big update in the (more or less) near future. I‘m currently reworking all the actions and also add new stuff.

If you have any requests, what actions you need for todoist, just leave a reply here and I will see what I can do