Is the draft selection interface a bit of an unsung hero. It’s been a feature of Drafts for a good while now (since 2018, in some form?) but it was only earlier this year that I really began to appreciate how useful it is.

Because it can retain context separately from the drafts displayed in the drafts list, and because its two-column grid (on an iPad) offers a higher information density than the regular single-column drafts list, it’s really useful to use as a complementary side-panel for navigating a custom workspace. Since there’s been a bit more talk about Roam/Obsidian-equivalent features in Drafts recently: this interface can be a functional equivalent to a side-panel of related items, even if it has to be loaded manually via an action.

For anyone new to using Drafts as a tool for note-taking and/or knowledge management:

Feel free to suggest or link to others.

What IS the ‘draft selection interface’ which ‘retains context separately’ with a ‘two-column grid [that] offers a higher information density’… ‘really useful as a complementary side-panel’.

You have sold it to me, but now I would like to know what it is! 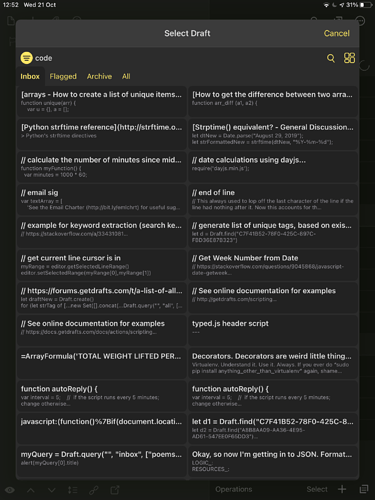 It’s an interface that’s called programmatically, so you’d need to access it via an action.

What IS the ‘draft selection interface’ which ‘retains context separately’ with a ‘two-column grid [that] offers a higher information density’… ‘really useful as a complementary side-panel’.

It is actually mentioned, but the description is only applicable some of the time.

“Showing a little love for app.selectDraft.”

On the iPhone you get a single column selection box like this: 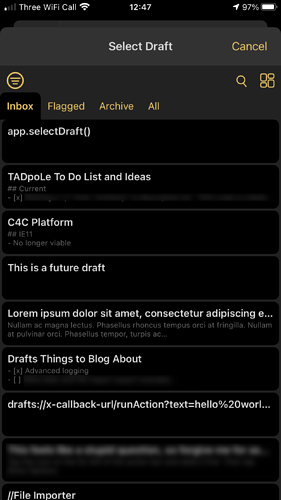 On the Mac, you get a single column selection box like this: 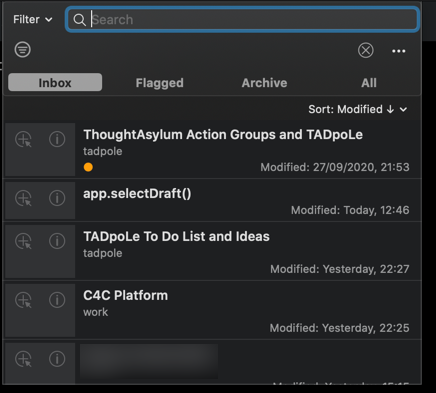 On the iPad however, you get a double column layout like this: 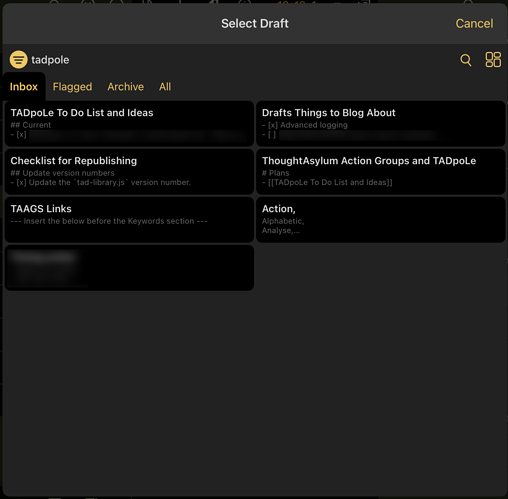 EDIT: Looks like my answer was overlapping with @jsamlarose there.

On the iPhone you get a single column selection box

Fair point. And shows up my biases in terms of how I use Drafts!

I’ve updated the original post to acknowledge this, and included a link to a simple starter action that calls the interface. @greiggy: if you’re still interested after the above explanations, try that first action I’ve added to the list of use cases.