TIP: Open drafts directly to headings with "Open to" menu 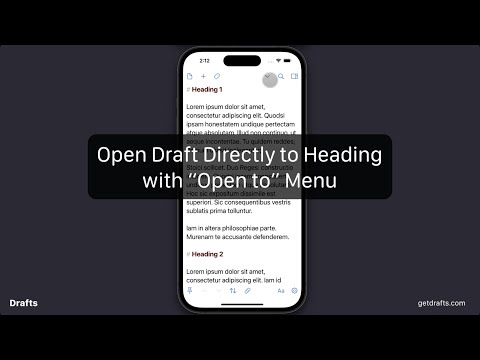 New in Drafts 33, the “Open to” menu enhances navigation in longer drafts.

Now not only can you navigate with your open draft to headings with the navigation menu, you can also open drafts directly to heading using the “Open to” menu on the contextual menu of items in the draft list.

This feature is, of course, also available in the Mac version.

The available markers are dependent on the syntax used for the draft. Most commonly, these will be Markdown “##” headings.

The “Open to” menu is, of course, also available on the Mac. Just right-click on drafts in the list. 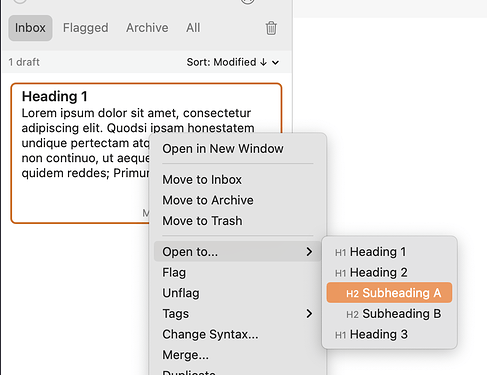 Was looking up this new “Open To” feature and wonder if there is more that can be done?

Any way to WikiLink to a heading or subheading?

Far as I remember, the ability to link to a heading/subheading pre-existed this. You need a forward slash in your wiki-link that corresponds to a heading e.g. [[title of draft/heading]].

There was a time during which I used to forget this, and I’d occasionally be rewarded with an error dialog for using drafts titles with forward slashes in them (which is probably a bad idea anyway if I ever want to convert my drafts to files)… minor inconvenience, though…

Spot on - it works with navigation markers, so headings in Markdown. You can get the details in this section of the linking documentation.

@jsamlarose @sylumer I don’t know how I’ve overlooked this?!

There’s probably an entity reference for / - but I wonder how well it does in titles.

That is explicitly mentioned in the docs @sylumer linked above…

Due to the use of the / forward slash character, if you have links to titles which contain a / , it will need to be escaped to function properly. For example a draft titled “Blue / Green” would be linked to as [[Blue \/ Green]] .