Drafts has long had a navigation feature available in the top right corner of the editor. On Mac, this opens as a menu, on iOS as a popover, and provides access to markers in the current draft, as well as ways to navigate to previous, next, and recent drafts.

With recent updates, it is now possible to access this feature both via contextual menus on iOS, and via scripted actions - making it easier than ever to move around within a longer draft. 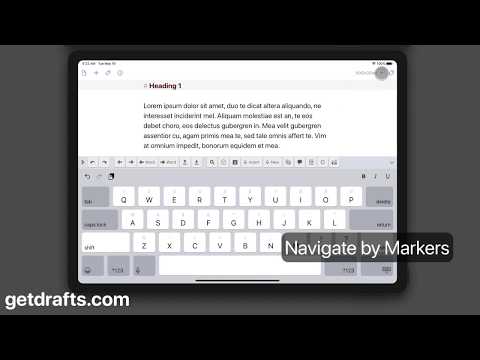 Navigation markers are defined by the syntax highlighting in use for the draft, and may vary by syntax, but in the case of Markdown drafts, markers are generated for all headings (## Heading).

Tap and hold the navigate button, and you get a quick access menu with all markers in the current draft (along with some other options).

These actions require Drafts 20 or greater and utilize new marker-related properties and functions of the Editor scripting object.

It can also be handy to add actions to move to the previous or next marker in the document to jump around:

Plan to use these often, consider assigning external keyboard shortcuts to the actions after you install them.