I’ve made some update to the example Tools action group. The actions can be installed as a new group, or they are all available individually in the action directory as well, if you wish to only install some you are interested in. 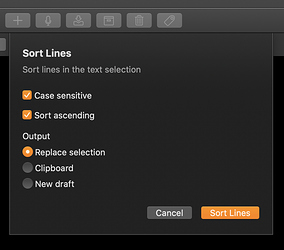 The biggest additions include several new multi-function tools which have options related to their function as well as output options to replace text selections, or send result to clipboard or a new draft. These are:

Some other examples for straightening quotes, trimming whitespace and more have been added as well.

If there are other examples of common string transforms you’d like to see, please ask here…will likely create a few more examples. There are many others from the community already in the action directory as well. A few great ones:

Rot13 encoding and decoding? Is that still a thing anymore?

Forgive me if this already exists but is there an action that will permit searching-and-replacing predefined text?

I’ve used TextSoap for this function for years on the Mac, but I’ve just started using the iPad as my primary computer when I’m away from my office, and so I’m looking to switch to Drafts for that cleanup.

Create an action with a single script step and put the script below into it. It would then be a case of building out the script to meet your particular requirements.

If you look at the lines starting replaceAll, I’m sure you’ll get the gist of what it is doing, but you just need to produce a big list of what you want to find (first parameter) and what it should be replaced by (second parameter).

I’ve pre-populated the script with smart quotes, em dashes, and a couple of HTML entity examples.

BTW, I’d suggest posting queries like this as a new topic as it is only tangentially related to this text transform group and then further discussion around your particular request won’t deviate the original topic.

Very helpful! Thanks so much!

And of course you’re correct about creating a new topic.

What about a simple sentence case option?