Am I wrong or does the TAD-Make Draft Executable (tadMisc.TA_devSetRunDraft) toggle the tag #run#

I am fine with the toggle but that would not be my choice on the action and function name.

Am I wrong or does the TAD-Make Draft Executable (tadMisc.TA_devSetRunDraft) toggle the tag #run#

It is documented, but it is whatever tag you happen to have set. 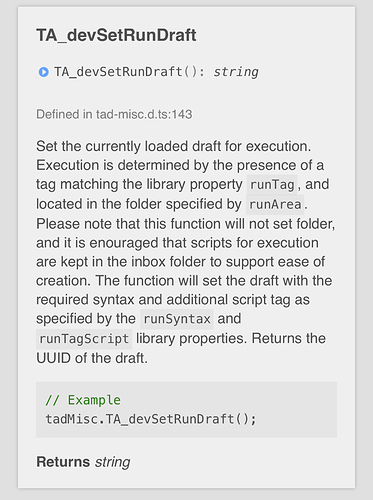 I am fine with the toggle but that would not be my choice on the action and function name.

Perhaps you just need to view it out of isolation to see some of the reasoning behind the naming? 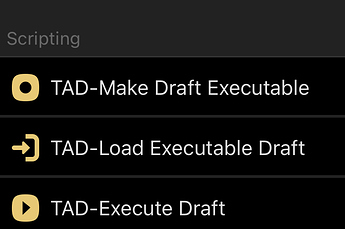 Yeah but … I do not read anything from removing the #run# tag and that is what it does on my mac and my iPhone.

It might be a side effect but if I run the “Make Drafts Executable” on the the executable draft (marked already by the tag) it will remove it - and not add it again.

The difference would be on the second call.
A make executable will keep the tag. The toggle will remove it by choice.

Just saying - I may be in the wrong track but … maybe not.

Ok.I agree with that new point.

I’ll update the behaviour for the next release.

ok. nice that I got it across the second time.

If you run TAD-Setup/Refresh it should pick up the latest changes. It looks like trying to update the draft in a loop and then again immediately after the loop would catch the app out in however the updates gets queued up. Simple enough to resolve by applying a check in the loop part of the function to skip updating the current draft; not an issue as adding a tag twice still yields just a single instance of the tag.

The looping part actually goes through all drafts in the run folder and removes the run tag, then the tag is added to the current draft. This is to ensure that there is only one draft flagged for running. But that’s where it was falling out of sync with the double update.