Siri, create a note with Drafts. OK, I created a note, Draft

”Siri, create a note with Drafts.”

OK, I created a note, Draft.
Here’s the traffic. Take a look… 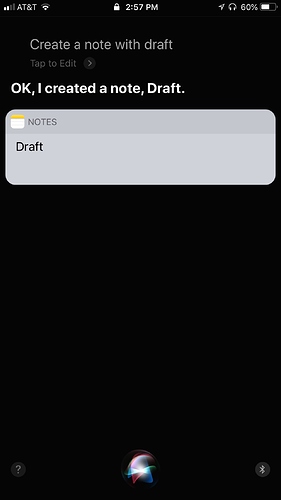 Try “Using Drafts, create a note”. I get much more reliable recognition from Siri when the app identifier comes first.

Also double check in iOS Settings that you allowed Siri permissions for Drafts. Any reboot the device for good measure.

That said, I think you are much better off just launching Drafts to dictation. “Hey Siri” is a mixed bag.

Would love a page on Siri tips for invoking. I had similar frustrations recently. Going to be resolved either way when I pick up an Apple Watch to dictate from there, but Siri is still the best way to add a Drafts note when I’m driving.

iOS 12 Shortcuts will make that a lot better. You can attach your own key phrases to trigger Shortcuts. I have one setup to do “Hey Siri, Dictate” and it launches directly to the Drafts dictation interface on the phone.

That’ll be great! I imagine that’d require an unlock, but I’ll see how handsfree Face ID works when I get my next phone…

Thanks for your guidance, @agiletortoise! Technically I do not have “Hey, Siri,“ enabled. I just used artistic license for the title of this. I trigger it by pushing and holding the button.

I debated between posting this in Feature Requests or in Tips and Tricks category, but settled here because I want to ask if there is a synonym for the app.

I understand that apps can be given a synonym for use by the system. It seems the word “Drafts” Is hard to recognize on a variety of microphones. Is there, or can there be, a synonym for this app?