Greetings! I’m trying to create a Shortcut that first creates a Draft, then grabs contents of other Drafts and appends them to the new Draft created in the beginning of the Shortcut. It keeps erroring out after initiating the Shortcut, saying “URL Error: Draft not found for UUID.” I can’t quite tell where the error is, but I suspect it’s at the very beginning right after the creation of the new Draft. I find a Draft with the title I set, but no text. Is it not possible to create a new Draft and then add text to it within the same Shortcut?

I also suspect I’m making it more complicated than necessary. I have a Workspace in Drafts that holds these separate Drafts, but couldn’t quite figure out how to pull the contents from all drafts in a workspace and then create a new Draft and set the title.

Any ideas or advice would be appreciated. I’m including a stitched screenshot of the Shortcut in case anyone would find taking a look helpful. 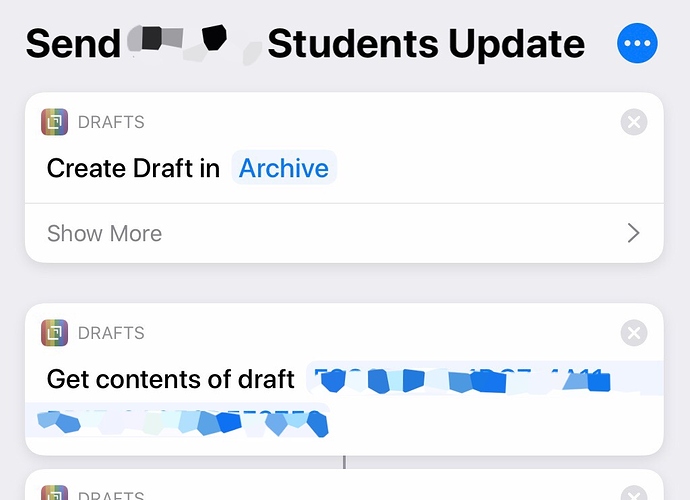 Try this shortcut as a starting point.

Put all of your UUIDs in the text field at the start. Combining them like this should make it easier to maintain the shortcut. Once you have done that, run it and see if it does what you want for the combining element.

After that, just use the combined text to convert to your rich format PDF. You shouldn’t need to access the archive to do this because the text is all available in Shortcuts.

In terms of seeing where your shortcut gets too just add in some show results or notifications between actions.

The workspace summary example shortcut might be a good starting point for you. It grabs all the inbox drafts in a workspace, and builds a summary of their content.

It displays the final result, but the shortcut could also end with a “Create Draft” step that put that summary back into a new Draft.

Thanks! I’ll give it a whirl.

Fantastic, I’ll give that a try as well. Thanks!