I am trying to save to a specific folder in Dropbox (nvAlt) but everything goes into Dropbox ‘loose’. When I imported the action I was expecting to find a dialogue for the folder. I have searched on the edit of the action… Where do I find the configuration of Dropbox so I can define the folder. Sorry if I have overlooked something obvious to others but I missed it…

You will need to write a simple script I think; if you have a script already, please post it. I don’t think Drafts can currently poll Dropbox for a list of files and folders, so you have to specify the path of the file to write.

(Based on example in documentation.)

You could easily create a prompt to collect the path/filename.

I saw a video about this action ( in Drafts 4) which included the logical step of folder selection.

If you want to select arbitrary destination each time, you are better off using the “Save to Files” action which exports to iOS File app - and can save to Dropbox (or iCloud Drive - or any other destination you have configured).

If you want a one tap action that is pre-configured to write to a specific folder in Dropbox without you needing to select it, then you can use a Dropbox action step and define the path field to point to that folder and it will automatically go there every time. 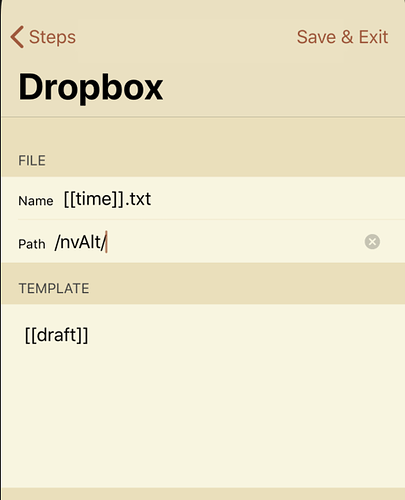 Where do I find the path setting? Not in “edit”, clearly…

If you are new to editing actions, this screencast would probably be helpful. It has nothing to do with Dropbox, but walks through the basics of edit action and action steps.

If you follow similar steps to what’s in this video, but instead duplicate the “Save to Dropbox” action, and tap into the steps, there is a “Dropbox” step which is the what is in the screenshot above.