Please allow me to request that when when one taps and holds the screen and thus gets the popup menu, starting with “Select” and then “Select All”, that there be another choice between those two, of “Select Line” (preferably with the line feed at the end of the line included).

Being able to edit that list of popup actions would be even better!

Thanks for the response!

Alas, that is not true, at least not on an iPhone 7 Plus running iOS 12.4. Double tapping selects a word; a third tap deselects the word.

I stand by my request.

I think the gestures became standard in iOS13 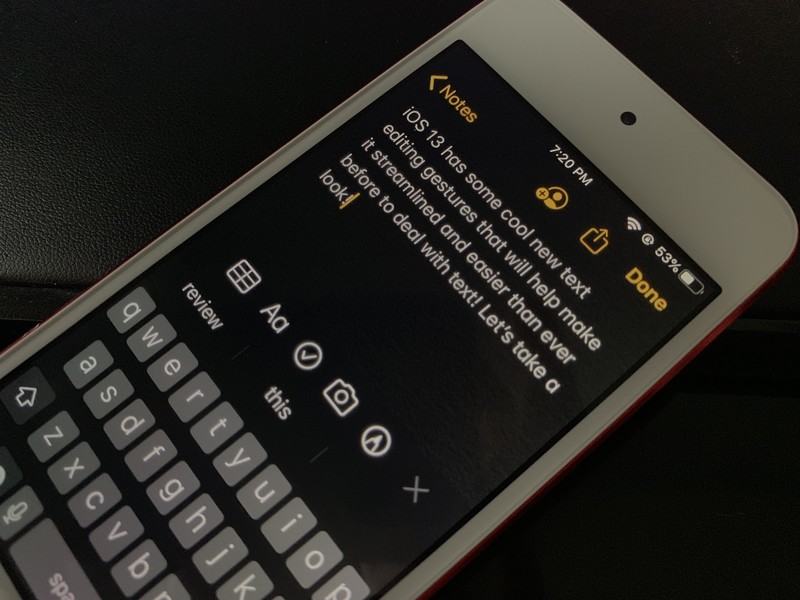 Here's how to use the slew of new text editing gestures in iOS 13!

Among the many changes in iOS 13 are some new text editing gestures. Here's how to perform them all.

The question then is, does it make sense to manually code for a feature that the latest operating system provides,having to override/duplicate the functionality and have to unpick it out once the older OSes are not supported on Drafts? It certainly wouldn’t be a strategic thing to do.

Perhaps as a workaround it would be apt to add an action to do the selection to the bar above your soft keyboard, or if you are a hardware keyboard user, a keyboard shortcut to such an action?

Richard, try this action that select word->line->all. It should help.

I apologize for the delay in responding . . .

I did end up creating a two-line script for selecting a line:

I just would request that it be part of the popup menu (as originally noted), as my customizable bar above the iPhone’s keyboard is getting much too long, and not everyone is willing to move up to the latest version of iOS.

I just would request that it be part of the popup menu (as originally noted), as my customizable bar above the iPhone’s keyboard is getting much too long

Just for awareness, you could make your keyboard bar buttons pop-up menus of options for what to do if space is becoming an issue and you are averse to the swipe scroll to view more buttons.