I have a two step script. Step 1 runs a shortcutthat puts its output on clipboard.

Step two is the script.

The script pastes the contents of the clipboard before running the shortcut.

When the script is finished I can paste the correct contents. It’s as though step 2 starts before the Shortcut has finished.

If I run this multiple times in succession it pastes in the previous Shortcut result every time.

What could I be doing wrong?

I’m guessing that you haven’t set your first step to wait for a response. 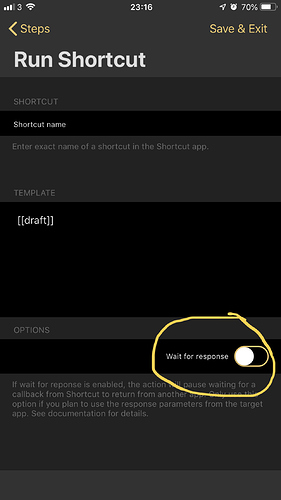 If that isn’t it, can you share the whole action please? It is the context rather than the script that is important here.

That was easy. Thanks!

I did a few things with Drafts 4 but I have been away for awhile and am reorienting myself.