I’m trying to get a shortcut to work as a search and replace across all drafts in a workspace.

The basic structure is the same as that used in the shortcut Greg provided: Workspace Summary.

I have substituted the "Replace with each item in… action for the actions Greg uses.

I had no luck with this. I tried as many variations with the Repeat action as I could think of. None resulted in a successful replacement - actually in no action at all. No error, and no modification to a draft - the shortcut completes but nothing happens.

The first switch is for case matching and the second for using regex. I’ve turned both off – I’m not trying anything fancy, just replacing one string with another.

I’ve tried various delimiters for the existing string and the replacement string. I’ve tried “Drafts” and “Repeat item” for the third parameter in the Replace action. Nothing I’ve tried works.

Any help in making this work would be appreciated.

Can you share what you have? We’re working practically blind without it.

Just one blind question, are you using draft.update() or similar at any point?

This is the shortcut that I’m using: 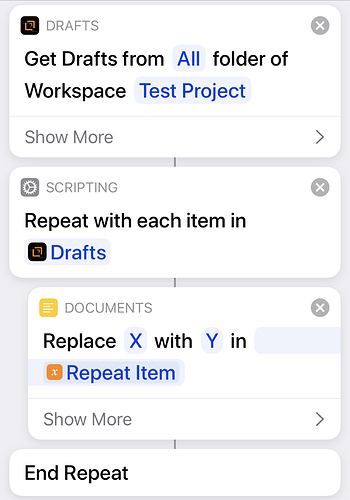 I’m not using draft.update(). There is an action labeled “Update Draft” in Shortcuts.

I’m using a set of about a half dozen drafts in a test workspace. I’m trying very simple string replacements. For example, I might add lines with “abc” in several of the drafts in that workspace and try to replace “abc” with “def”.

My eventual goal is to be able to replace both a draft title and any links dependent upon the title elsewhere in a workspace.

Sorry, I’d figured for a find & replace you would be scripting it inside a Drafts action and rather than it actually being a Shortcuts shortcut; a bit of a long way around is all.

But the equivalent looks to be true. You are putting Drafts objects into Shortcuts and then not updating the drafts themselves.

Hope that gets you going again.

Note, you can get rid of the show action later. I put it in to show you how you can check the content is being replaced

Thank you. Works great and is exactly what I was looking for.