I have not found the option of opening a preview page in a new windows on iPadOS, i don’t know if I haven’t looked good enough or the option isn’t there.

I found the option to open a Draft in a new window, but not the preview page, and I’m not talking about the live view found in the left bottom menu, I mean from an action.

Since the realice of the linking drafts I’ve been wanting to do this.

Have you read the details here? 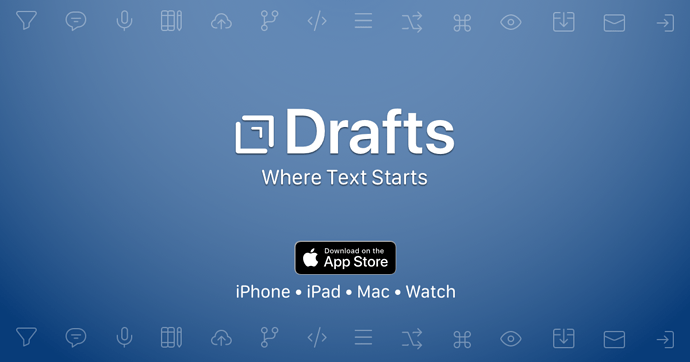 Yes I have, but all it sais is

But no JavaScript functions can be performed when doing so, at least that i have found.

And when doing that preview in a file with liked drafts, only the syntax shows, not the linked drafts

Yes I have, but all it sais is

That’s about all there is to a preview. This is equivalent to a preview step in an action.

But no JavaScript functions can be performed when doing so, at least that i have found.

It’s a preview. What JavaScript are you expecting to run on a preview?

And when doing that preview in a file with liked drafts, only the syntax shows, not the linked drafts

Yes. You are previewing the file with that preview.

It sounds like you are thinking of a transclude preview like the one Greg created, but that’s a very special case solution, not a standard preview. You can build all sorts of special case, custom previews with an action, but that is custom, not standard, and so is not an option for the standard side-by-side preview. Not currently at least.

It sounds to me like you want to request a new feature to support action previews in another window.

Oh yes, I guess it was that, a transclude preview in another window.

Thanks, I’ll just wait and see if anything is added in the meantime I’ll continue creating a new draft for previewing.

Is there a way to open the HML preview as a new window? (Not in a dialog above my opened draft)

Like the quick action in the popup menu here 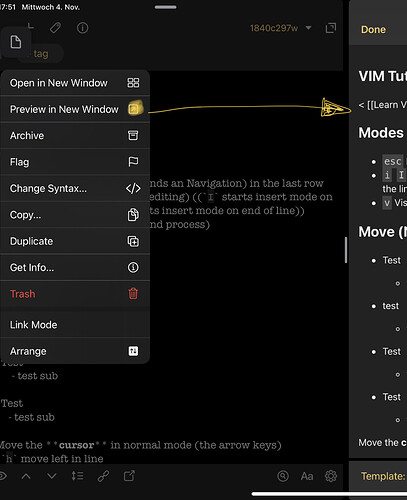 I would guess there is none. :sad:

I don’t think Greg has added anything (action step parameter, scripting option, URL scheme option, etc.) to support that on the iPad in the last 5-6 months, so apart from on macOS where there is a keyboard shortcut for the “Show Preview” option (which spawns a new window), I don’t think that there is yet.

thanks.
I thought so.

The preview in new window might have been a solve for the outline mode with foldable headings - at least in the non edit window.

But I have not seen a way to control the used template for that window.