Preview and Print : accidentally discovered that tab has same effect as backticks

thanks to the help of @sylumer, I can now preview and print using yellow highlight for pre code, which according to markdown syntax is backtick delimited.

I serendipitously discovered by accidentally pressing on the tab key that if I press on the tab key:
1- at the beginning of a sentence
2- if the sentence starts at the left margin

The sentence converts to pre code display. The font changes, with a yellow highlight, just as happens using backticks.

I was wondering why this is

I don’t see any mention of tabs in markdown / CSS syntax, except for code, which is something else.

I was wondering why this is

I don’t see any mention of tabs in markdown / CSS syntax, except for code, which is something else.

It is part of the Markdown specification.

thank you. Why is it that when I use tab, the sentence is truncated in the preview / print in IOS and also in Marked on Mac ? Truncation basically makes the tab useless as a highlighter 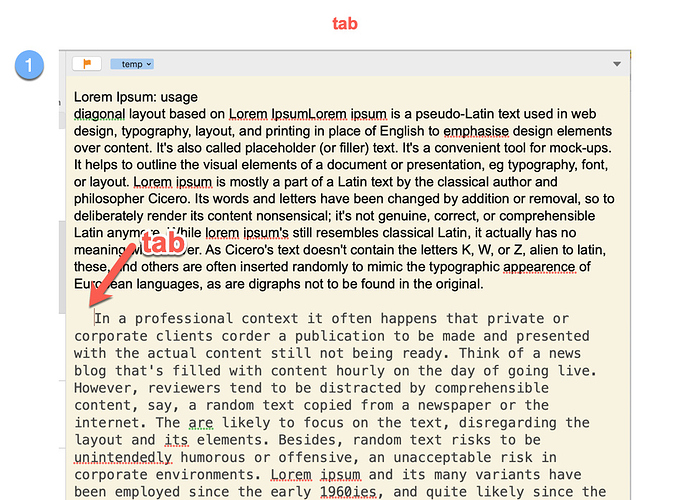 please click on image to see the bottom half

That’s your CSS. The pre-formatting will only show hard line breaks by default - which is an accurate representation. The editor is showing soft wrapping as it isn’t a preview of actual content.

It makes sense. Should have thought about it
Thanks very much