One important feature I miss in Drafts is the option of having a section/column in the right corner where you can enter metatext such as a little synopsis about what this particular note is about and general comments / TO DO’s, and so on. If implemented, then it would be possible to only have the real text in the actual note (and not like now where we have to blend the real text and meta-text and TO-DO’s together in the same note).

If this feature was implemented, I’d surely sign up for Drafts Pro the very same day this feature became available.

PS: to visualize what I mean, please see the enclosed screen dump from Scrivener 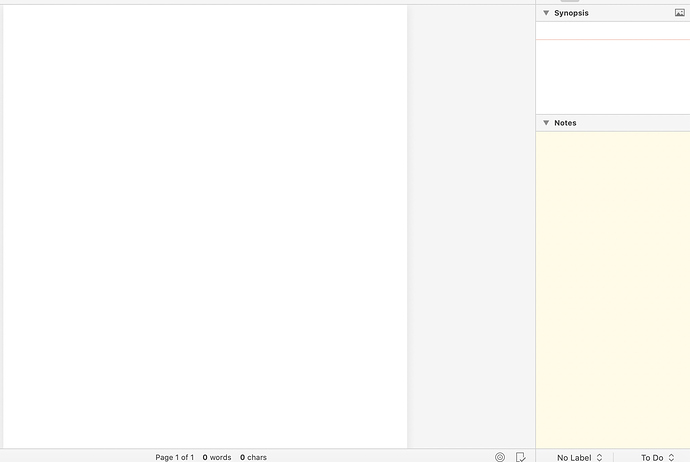 JavaScript formatting in the editor in the script step. When searching for an action, you can edit the action, but you can’t tell what action group it is in if you say wanted to move it. Having that info in the action would be useful for this sort of thing. An option to store a small amount of custom meta data against a draft. e.g. in say Microsoft Word you can add a field to store the name of a client or a secrecy classification. I’m thinking this could have many uses, but one I’d really like …

I have a terrible(?) habit of craving really flexible options.

I made up a Meta Data Example action that sort of addresses this need within the existing feature set of Drafts.

Note the findMetadataDraft and findSourceDraft functions in the script could be reused in other actions to, for example, locate and include the meta data content in an export.

From the action description:

Example action demonstrating how one could auto-create related meta data drafts to enter notes about the current draft, and flip back and forth to that meta data draft using an action or keyboard shortcut.

The first time this action is run on a draft, it will create a new draft with the tag metadata, filed in the archive, with front matter like:

You can then enter notes about the draft in this metadata note.

In use, assigning a keyboard shortcut to this action would easily allow you to toggle back and forth between the draft and it’s meta data.

The meta data note, once created, could also be opened in a separate window for editing next to the source draft on iPad or Mac.

Thank you for another action that I can see myself using time and time again.