I have a couple Shortcuts that create a new Draft and open it for editing. I’m not sure when it happened, but somewhere along the line of Drafts and iOS 16.x beta updates, the Open Draft action stopped working.

The Draft gets created but Open Draft does nothing and returns no error.

I know a lot is changing with Shortcuts and App Actions, just wanted to make sure this was on the radar. 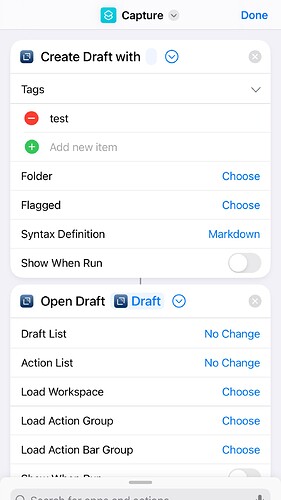 Thanks for the report. I’ve been able to reproduce here on iOS 16.1 (of course the exact same code works fine on macOS 13 and in the iOS 16.1 Simulator - but not on the device. Yea, Shortcuts!).

Seems to be a new variation on the bug with parameter passing that was in iOS 16.0.

I think I have a workaround but will need to test more. Should have a fix in an update soon.