Not synching from iphone to apple watch

I have installed trial pro on apple watch, iphone, and ipad.
synching works fine bidirectionally between iphone and ipad.
However, synching between watch and iphone appears to be one way, that is
note created on apple watch is synched to iphone. However, if I modify that note on iphone, the mods synch to the ipad, but not back to apple watch. I saw this identical problem with bear on the apple watch, as if the issue is underlying in the Apple synch kit. I am running the following:
Apple watch series 3, watch os 4.3
iphone 7 with latest ios public beta
ipad pro 10.5" with latest ios public beta

Sometimes mine has been a bit slow to sync in that it has taken several minutes to appear in either direction rather than being after just moments. If it is taking longer, then I’d recommend removing Drafts from your watch (only) and then re-adding it. I know that has fixed issues in the past with other watch app sync issues, so it would at least be worth a try in your instance.

Thanks for the reply. I will tryre-install

Changes on phone get pushed to the Watch when Drafts is made inactive - e.g. you hit the home button or leave the app. So if you are sitting there watching it waiting for a change to appear on the Watch, you won’t see anything happen.

Watch apps can’t run in the background and are much more battery constrained, so don’t always update as quickly.

When Drafts does update the Watch app, it happens by passing the data to iOS and iOS schedules the update - along with updates from other apps - to optimize battery life. In general, if there’s a good connection between phone and watch, and they both have good battery remaining, I’ve found that happens almost immediately, but not always.

I’m finding that there is often a draft I have deleted on my phone remaining on the watch app. If i try and delete in the watch app, stays still. Bit odd. Only seems to happen with the last draft left on the watch.

It seems that the watch is reluctant or delayed in getting updates from the iphone. In the example you gave, there would be a pending delete waiting to upload from the iphone. I find that I can do anything on the watch that adds or deletes information and the synch is forced to run immediately. It picks up changes and deletes and adds that are waiting on the iphone.

I have developed the habit of setting a flag on the watch and the updates run each time.

Edit - one day later
I want to make sure my Apple Watch Drafts App works for me without my iPhone.

This morning all my notes had synched. I just tried another test on my Apple watch. I dictated a note into my Drafts App on my Apple Watch. Then I dictated another note into Things. Things synched instantly and Drafts was just a few seconds slower today. That means (based on my highly unscientific two-day check) that Drafts works fine, but it can take a while sometimes. If I absolutely need to send myself a note immediately, so I am sure that it will absolutely be on my desktop moments later, then I can use Things, a notebook, or something…

But I don’t need to do that very often.

I think that writing piles of notes and sending them around to different devices is cool, but sending a few really great ideas (if I ever manage to come up with any) and thinking about them carefully over time, is much cooler, and something I need to work on. So drafts taking a bit of time to synch might be BETTER.

I am very happy with Drafts now.

As per the watch app documentation, it should be more or less real time sync. 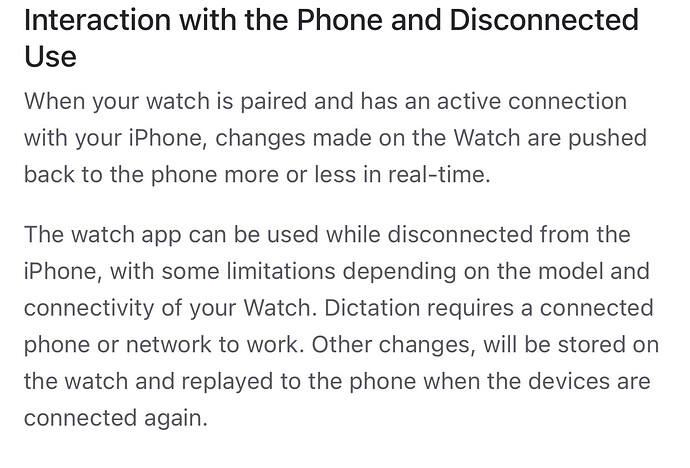 There are not really any settings to change for this - it should just be syncing.

If you are having issues with watch sync, it is probably worth you raising a support request - there may be additional.log info or the like that Greg can interpret and advise on resolution.

Make sure to include your app versions, OS versions, device models, description of behaviour you are seeing - what does/does not sync in each direction (watch <-> phone ( + other devices if relevant)).

Thanks. I have been away, so I didn’t see this note. Appreciate this info. I have the Apple Watch 7 with cellular. I got cellar to see if I could use my watch without having my iPhone 12 Max, which is a bit heavy sometimes. Everything is fine at the moment.