I have a prompt step that populates a ‘dotags_button’ template tag. Depending on the presence of a ‘Callback URL’ action step, the [[dotags_button]] template tag will go missing. Here are the specific steps:

I’ve created a Draft action an a Shortcuts shortcut as follows.

In my test (which you can download and reproduce), the output for both prompts and the shortcut was “lorem ipsum”.

In effect, I’m not seeing the issue occurring in my simplified test which I think you are describing.

I’m afraid I don’t use Streaks and so can’t attempt to reproduce what you have. It may be that this is specifically related to Streaks, but if that’s the case, if you substitute in the Shortcuts shortcut call I use above for the Streaks one, that may give you some additional insight as to if the issue is there or elsewhere in the action.

Also if you add a prompt to display your template tag between each step as I used in my example, that will confirm which step is affecting your tag value. I note that you have said it is the Shortcut step, but you haven’t indicated how you know it is that rather that either of the two prior steps.

EDIT: Added versions to cover both the beta and non-beta for template tag setting options.

Thanks so much for the reply. I’ve got two actions that I simplified somewhat, but that still illustrate the behavior:

Again, any insight you have would be very welcome!

I made various action revisions and here’s the one I used in the screenshots below - Debug templateTag With X-Callback.

If I run the action against a sample draft with a single line of content I get a result that supports your assertion. 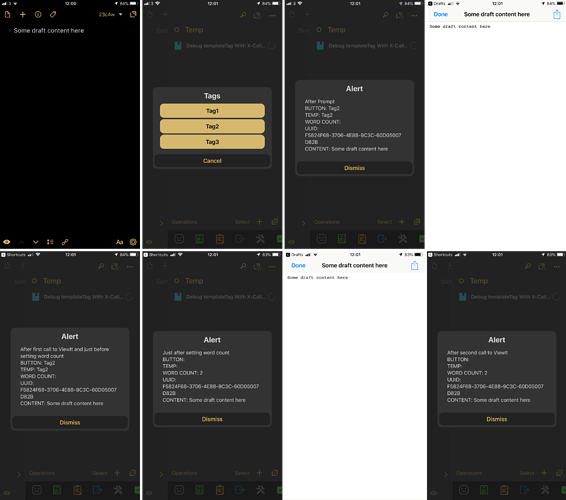 But, if I run the action against an empty sample draft however, then the result is different. 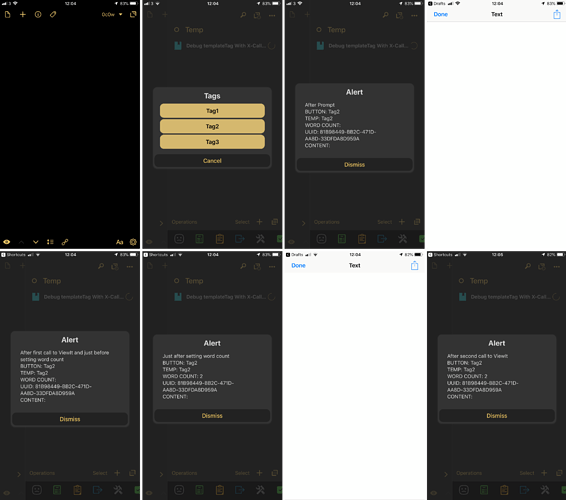 That difference in behaviour based on content suggests something strange yet inconsistent is going on.

@agiletortoise - any chance this is a bug or are we missing something obvious to explain the differing behaviour?

Interesting. Rather obscure issue, but definitely a bug. Will fix in the next update. Problem comes from Drafts refreshing the draft when returning from a callback to make sure nothing has changed while you were gone from the app (e.g. the Shortcut itself could update content of the draft) and the temp template tag storage not getting updated properly in the scripting runtime.

Thank you both! I suspected as much, but was open to the possibility that I was doing something incorrectly.

I’ll watch for the update.

Latest beta (14.5.37) definitely resolves the test case I posted above

Hadn’t expected it to appear quite so quickly Greg!