Mimicking the Safari Share Sheet to Export Drafts to Notion?

I am desperately trying to make Notion and Drafts play nicely together. Right now using the share action in drafts to send a draft to Notion through the share sheet sort of works. But on the Notion end, it wedges all of the text into the title field and leaves the body blank.

However, when using the share sheet from Safari, Notion seems to parse everything correctly. The webpage name is set as the title, the webpage URL connects to the database URL field, and the page content fills the body section of the Notion page. 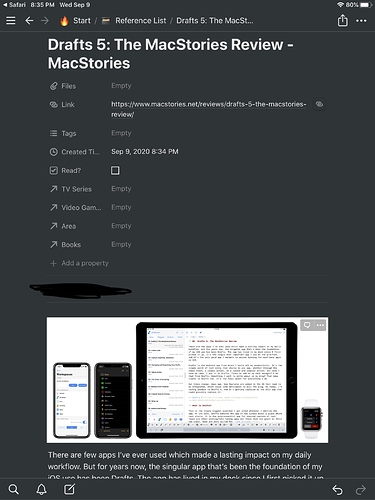 This has me thinking that there’s got to be a way to replicate this with a Drafts action. Having a link back to the original draft using the URL field would be icing on the cake.

Much as I appreciate Notion for what it does and continue to use it for collaboration, I’ve been frustrated by a few gotchas like this in the past and have since stopped looking for tighter integration. I get the sense that integration with other iOS apps is lower down on the list of priorities, but I’d like to believe that they’ll get there eventually.

In the meantime, have you tried to use Safari as a “mobiliser”— i.e. preview your draft in Safari then clip it to notion from there? That might take a bit of scripting…

Still feels like there should be a better hack for this. I’ll take a further look when I have more time…

When and if Notion offers their promised API, I am excited to integrate it into Drafts. Until then, your options are going to be pretty limited from their end.

I’m with you. I understand that they are a web service first and making that the best they can is their priority. Yet, this is just a small thing in the way that’s blocking me from throwing everything I have in it. I think they’ll get there eventually too.

I haven’t tried this, and I don’t know enough about scripting yet to wrap my head around it. I did try sharing the HTML preview, but it just ended up copying the HTML code into the title field. I’m assuming what you are suggesting would be different?

Yep. Using the Notion share extension from a Drafts preview was one of the first things I tried.

Having tried a few other things since (and in the absence of that API access that @agiletortoise referenced) I haven’t been able to come up with a suitable workaround that would be easier than just copy/pasting a Draft into a new Notion window. You could shave off a few seconds through an action that captures the contents of the current Draft to the clipboard then automatically opens Notion, ready for you to manually paste…