Hallo,
for taking minute notes I use th Action: meeting template. It works great, but there is one issue: I wont make it to add sutomatic tags. When i start this action it would be great to have already a specific tag
Thanks a lot
Inge

Can you please post a link to the action you are using?

There are several ways templating drafts can be achieved, the ones I’d typically expect to see are based around the following.

Other ways to do this could involve URL schemes and external apps (e.g. Shortcuts), but these are less likely to be triggered by a Drafts action).

Adding new tags programmatically is quite straight forward. Here’s a bit of script that can be added to a script step that adds a tag ‘meeting’ to the current draft and updates the draft to in effect apply the tag:

Hope that helps, but seeing the action means people may be able to advise further.

Thanks
I use this action: Meeting template
I tried to edit with a step scripting, but I dont get it …

Ah okay, it looks like Tim used the clipboard and a URL call on that one for some reason.

I’ve built a new action for you that builds on and hopefully improves that previous one a little bit. There are other ways to do it, but I think this one will probably work best for you.

When you get the action, open it for editing and select the second script step, highlighted in red here. 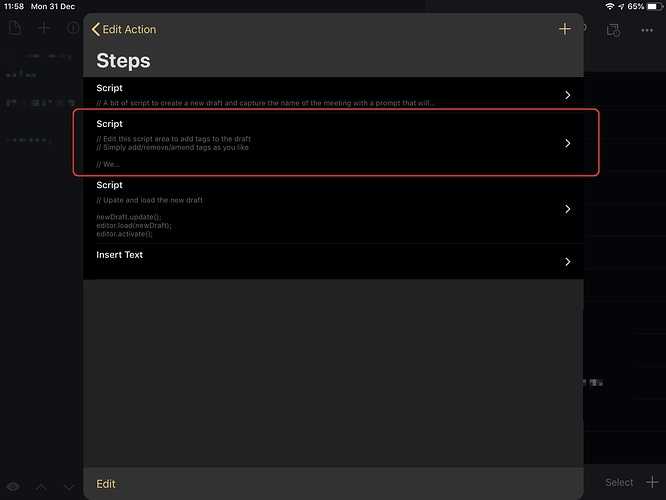 You could just have one scrip step, but I’ve broken it into three so that you don’t get distracted by the non-tag related lines of script. The second script step containss the following:

Remove, duplicate and amend the lines tto include the tags you want. The lines above add three tags to the meeting draft - meeting, example tag 1, and example tag 2.

Here’s a link to the Drafts action.

Hopefully that should match your needs perfectly.

This is more than great!! Thank you very very much. It works perfect.
Many greetings
Inge

Of course there a number of ways to do this, for the record, the URL can also accept a tag parameter. Tim’s original action could be modified to include the tag in the URL as well, like:

(Where “meeting” is the tag name)