Now that actions are available for both Mac and iOS, you may find there are times it makes sense for a single action to behave differently on one platform or the other, because URL schemes are different, or a particular app is only available on one platform, etc.

Do make an action behave differently, Drafts allows you to enable or disable individual action steps by platform in the action editor. Scripts can also detect the current platform using the Device object. Let’s take a look at examples of each method.

This post assumes you have edited actions before. If you are new to editing actions, start with the action docs first.

In the action editor, each step has options to enable or disable that step by platform. 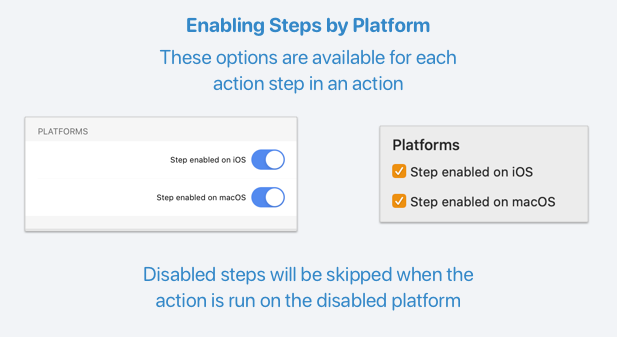 If the step is not enabled for the current platform, when the action is run it will simply be skipped.

A common case where it makes sense to branch the functionality of an action, is the case where URLs used to integrate with an app or service are not the same on different platforms. Here are two example actions demonstrating:

Another good use case for enabling and disabling action steps by platform is the case where an action is known to only work on one platform, because a particular app or service is not available. In this case, if you are publishing actions to the directory, it is useful to provide feedback to users if they try to install and run the action on an unsupported platform.

Say you have an URL-based action for an app only available on iOS. In the action configuration, enable the URL step for the app only on iOS and disable it for Mac. Then add a Prompt action step that is enabled only on Mac, and displays a friendly message, like “This action is not compatible with Mac.”

The Preview in Marked example demonstrates this in the inverse, as the Marked app is only available on Mac.

In script action steps, if you wish to detect if the action is currently being performed on the Mac or iOS, use the example below:

More details can be found in the Device object scripting documentation