Location metadata in drafts made from Shortcuts

I’ve been testing Shortcuts with the “Create Draft in…” action and have found that while these drafts include the creation date/time in their metadata, they don’t include the latitude/longitude. Am I doing something wrong, or is this a real limitation?

PS: I know I can use Shortcuts to add the location to the text of the draft, but I have Drafts Actions that expect to find the location in the metadata.

I get the same.

This is a bit of an educated guess, but I’m assuming it is because it isn’t opening Drafts to create the draft and so Drafts isn’t running to set the location. I think that it needs to be active to use location services based on the settings of “while using the app”.

Some apps having the always option I guess would be permitted background access, so it might be possible that having this option available would permit such location logging? 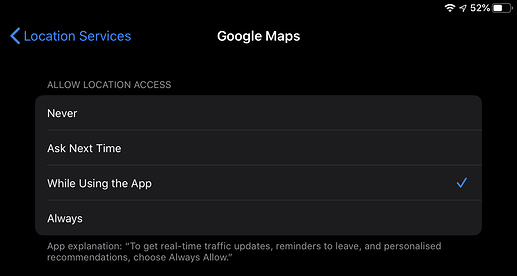 The URL scheme create option does switch to the app and does populate the location, so that would match to the idea of it requiring the app to be running to access the location services and set the coordinates.

Glad you brought this up. It’s is something I’ve been meaning to revisit. All through the Summer, location services could not be used reliably in Shortcuts extension. Shortcuts would usually timeout and fail the action before location lookup could be completed.

I had to disable location look ups for this reason.

I have not had a chance to retest and see if Apple has resolved this in an update. I will this week.

I can understand the timeout. I made a shortcut that used Shortcuts itself to get the location and put it in the text of the draft. It is veeeerrry slow.

Creating a draft using the URL scheme instead of the “Create Draft” action does add the metadata and runs quickly when I run the shortcut from my phone or iPad. Unfortunately, it requires iPhone intervention when I run it from my HomePod. I guess I have to decide between

I’m leaning toward #1, as the the location metadata is a nice add-on but not essential. The goal is to use Drafts to track my time with as little effort and distraction as possible, and being able to just say “Hey Siri, Track, blah blah blah” seems the best choice.

Creating a draft using the URL scheme instead of the “Create Draft” action does add the metadata and runs quickly when I run the shortcut from my phone or iPad.

Hello, can you share details on how you set this up? I am also interested in possibly using Drafts for “life logging”. I would be interested to hear more about your setup if you are willing to share. If you want to PM that is fine also. Thanks!