I tried using the Journal Workflow functionality to input weather and location. The dialogue opens, but when I touch one of the buttons, it goes to Workflow and says that the Workflow is not found. Any thoughts?
JA in KY USA

Where are you getting the actions from? Also, it sounds like you’re kicking off a Drafts action that calls a workflow; if you don’t have the workflow installed in Workflow, then it won’t run correctly.

Thanks for the quick reply. When I’m in Drafts the slide over action menu there is one labeled “Journal.” The Fourth action from the top is labeled journal workflow.

When I activate that action it brings up a set menu that has several options that I can choose from such as photo, audio, weather, location. The action accesses my Worklflow app, but I don’t have the app that the action is trying to find. I don’t have a way to know which Workflow it is looking for.

The action you are using does not sound like one that is installed by default with Drafts. Tim’s reference to “where are you getting the action from” I believe will be a reference to where you downloaded the Drafts action rather than how you access it within the list of actions in Drafts.

If you can’t recall where you got it, then you have two other options that I can see.

The first is to post a link to the Drafts action you are using. There may be some commentary in the action that explains where to find the workflow Workflow you need.

Failing that, if you posted details of what you would need the Drafts action/workflow Workflow combination to do, then I’m pretty sure you could get some help here in creating that.

Here is where I’m finding the Journal Workflow action.
I installed this Action Group… 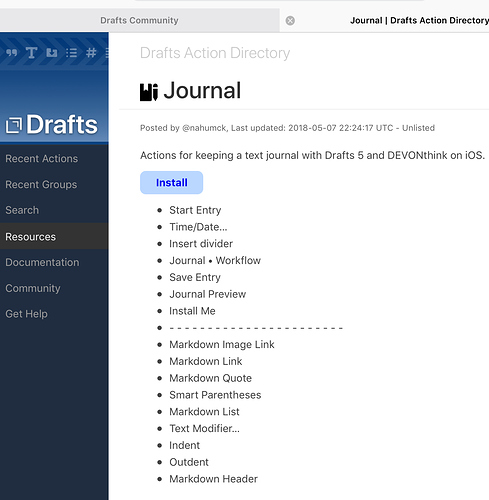 From that screen shot I can see that the action is unlisted and without the URL there’s not really anyway to obviously find it unaided. However I can also see that it is one of Tim’s, so he should be able to help you with it.

Yeah, this is mine. (Thanks @sylumer) The reason that the action isn’t working is that the workflows are not installed.

I’ll be writing this up soon-ish, but for now, you can follow the below:

(Note: these actions are for a journal and use DEVONthink to Go. They could be modified to use with Dropbox or iCloud Drive)

It can get a bit tricky, but once it’s all set up, you don’t need to mess with it.

Thanks so much for helping me with this. I will play around with it and hopefully, learn more about scripting. I’m enrolled in a JavaScript course now and learn better with real-application examples.

No problem with the install and configuring to work with Dark Sky. API key was easy to obtain.
Thanks again,
JA in KY USA

I am struggling with the photo workflow though.

It only shows me a blank file when I either hit Journal Preview or save the entry into DEVONthink.

Am I missing something here?

Have you also posted a workflow with Dropbox?

You do have to use the share sheet, clip to DEVONthink, and then move it manually. I was having an issue before with files saving. I should look at it again and see if I can get this corrected (might just do this in Shortcuts, however). I don’t journal photos every day (and I actually haven’t in months), but I’ll take a look. Might be part of the change when the default format for images went to heic.

I don’t have one for Dropbox, but you could easily create that. just replace the parts that contain DEVONthink (and you won’t need the share action block), and you’d be all set. I had it in there for a while, but moved to DTTG for the encryption.

Thank you very much for taking the time to reply Tim!
I think I miss something fundamental though ; )

I have deleted the share action, the DEVONthink action and have replaced it with a ‘save to dropbox’ action with a specified destination (Journal/Photos). The workflow then runs back to Drafts and creates a line as before, just like that:

However, if I hit Journal Preview it shows me nothing which makes me wonder does Drafts know that the link above leads to Dropbox?

Because I was saving in DTTG, the linking wasn’t the same. I’d suggest using a “Get Link to File” action block after the “Save File” to make sure you are getting the link to the image. Use that instead of the manual /Journal/Photos/ one that I had.

Thanks Tim!
Still won’t get the preview to show the image or save a working html file out of it, even when I use the ‘Get Link’ action and return to Drafts with a note like that:

Also won’t show with the ‘Markdown Preview’ action in Drafts, maybe it has something to do with Dropbox.
I might leave it for now and start afresh with the Shortcuts app in Fall ; )

I have located the issue, it was the dropbox link!

‘?dl=0’ in the dropbox url has to be renamed to ‘?dl=1’ and then the image shows up when hitting preview. Also, it won’t work with heic yet.

ah, good to know! also, you can use a Convert Image block ahead of saving the file, and change the format to jpeg. that’s how I tend to save my files now.

I got it working with DTTG yesterday using Shortcuts, and it seems to be working. I’ll likely publish it when Shortcuts gets released for real.