Using Drafts on an iPad via external keyboard, if you hold down command key you get this handy guide. 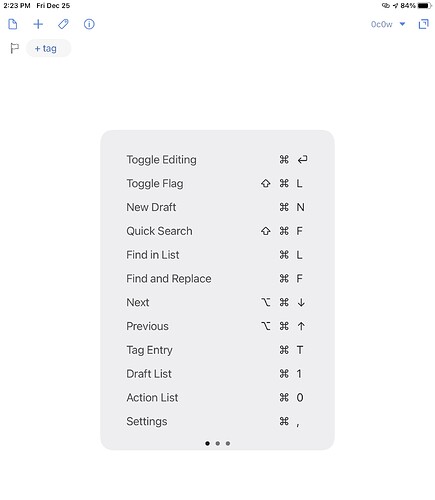 But the only way to view the other two panes is by swiping the screen with your finger. If it were possible to advance via command left/right arrows on the computer, that would be handy.

I believe this is a systemwide feature, and thus something which the developer cannot directly update

Perhaps there’s another way to implement the guidance pane.

As @dfay noted, this is a standard system-level feature. Overriding it would no doubt be against Apple’s design guidelines. An entirely different feature implementation would be required.

If you have an external keyboard connected to your iPad, you can use keyboard shortcuts to do things that normally need a mouse, trackpad or other input device.

The feature only triggers when holding down the CMD key. However, as soon as you press any other key, that tiggers a new keyboard shortcut combination, which is why the overlay pane of the shortcuts then disappears. So even if this could be overridden, it would still trigger something else as soon as you start using additional keys.

Perhaps we should look at this from a different position? @Jimmbo, what is it you want to be able to do in the app? View a list of keyboard shortcuts where you don’t have to swipe? If so, I suspect something could be put together using a preview-based action.

Sylumer, thanks, but there’s nothing so purposeful here!

I just rested my finger on the command key, was surprised by the pop-up guidance, which seemed delightfully helpful, then instinctively hit right arrow to move to the next pane…and it evaporated.

There are many small frustrations using external keyboard on iPad, and normally I suck it up, but, this being Drafts, I figured the Dev might see the benefit of implementing a more keyboard-friendly solution.

Also, this guidance stuff is obviously newbie-directed, and I’m not sure many newbs will even recognize that there are two other panes (the footer dots are only clear if you’re watching for that sort of thing). So there’s that, as well. All in all, this guidance stuff on mobile might need more love (especially given Drafts’ notoriously steep learning curve).

But I’m cool either way. I’m not complaining for me. One more swipe necessity won’t kill me, and I’m beyond-newbie enough to function without easy guidance.