iOS shortcuts..any examples of how to create a dictation draft and then run a draft action on it?

one of the thing i cant sell wrap my head around is how to create a dictation draft and then run a draft action on it? i can create a draft using the create draft with dictation action but how does one apply an action on that draft just created when the dictation finishes?

any examples would be highly appreciate d

thx a lot in advance!

After creating the Draft use a Search Drafts step in Shortcuts to get the most recent draft. That should be your dictated one. Then pass that draft object to your Run Action on Draft step.

Another approach is to use a Run Action with Text to trigger a Draft action that ignores input. That Drafts action could do the dictation and the subsequent actions steps you want. i.e. just ask Drafts to do everything in one go.

Then pass that draft object to your Run Action on Draft step.

This is where I got stuck now. I can as you suggested launch the dictation, search for the note but cant seem to run an action on that note: 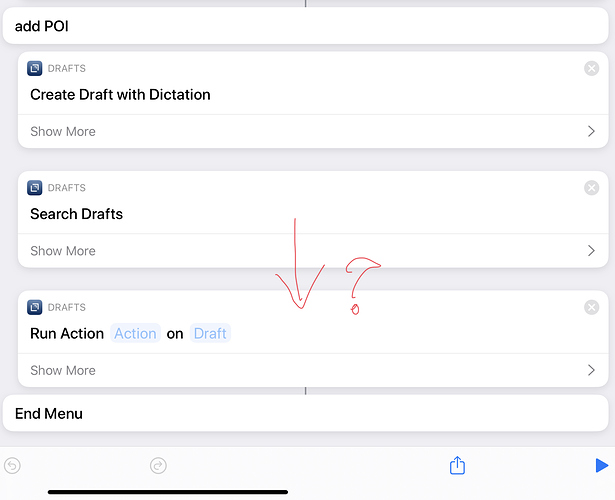 Do I need an additional connector?

Press and hold on the parameter. Select the magic variable option. Select the output from the search.

For example this one would run an action called Hello Test. 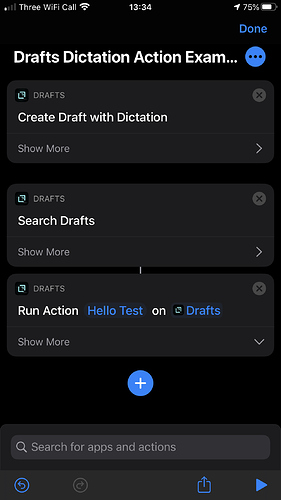 Hmm, actually I’ve been trying it with the dictation on my iPhone and it isn’t returning back to Shortcuts after the draft is created, but I am on the beta, so it could b an issue there.

Using an x-callback-url instead to trigger the dictation does give me a return back to Shortcuts.