I’m running Drafts 5 beta version 5.3.5.9, and iOS public beta 3 on an iPhone 6s and I am getting an “Invalidate Callback Ignored” Message after running @RosemaryOrchard TaskPaper to OF action found here.

The action runs properly and creates the tasks in OmniFocus as it should, but this is the first time I’ve seen this message.

@agiletortoise, let me know if you want this as an official bug report after running the action. 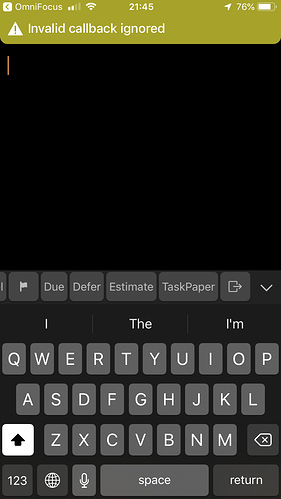 I tried it on my iPad running iOS 12 Public beta 3 and Drafts 5.3 (app store version) and I did not get the invalid Callback ignored message. I installed Drafts beta v5.3.5.9 and I got the message, so I’m pretty sure it’s something in the new beta. I’ll send in a bug report tomorrow Greg