In Drafts, I’d love a way to capture a handwritten note better than using the current Scribble to text functionality that’s provided by Apple out of the box.

There are a great many apps that do this, but ultimately I want a frictionless way of getting the text captured in drafts.

A potential implementation could be as shown in the screenshots.

The typical use case is if I’m in a meeting and this would be a benefit for 2 reasons:

Understand the interest and use-case, but this is a feature unlikely to come to Drafts anytime in the near future.

As you said, there are many other apps that do handwritten notes well, and specialize in the variety of complexities and functionality that come with those type of features. Many also do text conversation already, and provide ways to share the results to Drafts (I do this with GoodNotes, personally).

It is unlikely a partial implementation would be satisfactory, because there are inherently some things that would come up that make it more complex. For example, handwriting recognition is error prone and after conversion, most people would still want to have access to the original image form of the capture to refer to when correcting errors, etc.

Similarly, most people who do handwritten notes, often incorporate drawings, charts, etc., which do not translate to text.

As I said, understand the interest, but I think better left to tools that specialize in this area.

Maybe Scribble could use some love. The only thing wrong with it is it’s a bit mentally jarring to have to start writing small and then write in a larger space. Also, it seems each time you write a new paragraph is generated.

But, in general, I’d want to build on System capabilities.

(And, yes, GoodNotes is good. I’m wondering if there’s a good workflow to write in GoodNotes and put the text in eg a new draft.)

Thanks @agiletortoise. Your points definitely make sense and thanks for responding. Really appreciate the explanation as well!

@martinpacker, the workflow to get text out of GoodNotes and into Drafts (or anything else) is exactly what I wanted to solve. GoodNotes and Notability are both great apps but the process of getting data out of them is really fiddly.

. If anything comes of it, I’ll be sure to share it.

You might find the new Live Text feature coming in iOS 15 helps in this area as well, allowing you to simple take the handwritten notes on paper and use the camera to capture them to text.

I’ve tried it out in the latest iPadOS public beta, but for some reason, at least with my handwriting, it makes a lot more mistakes detecting my handwriting in the pictures versus directly in the notes. It’s definitely way more complex so I’m not at all surprised but it’s not really usable. If it worked more reliably, I definitely use that feature. Hopefully it works better for others as I love the concept of having it launch from inside the Drafts widget on the phone. 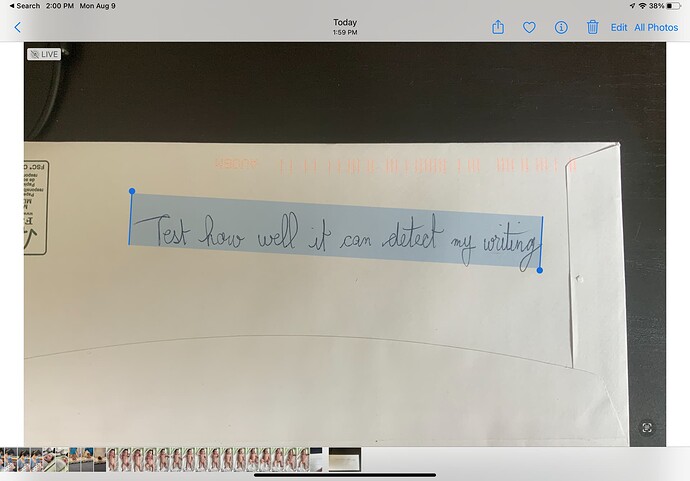 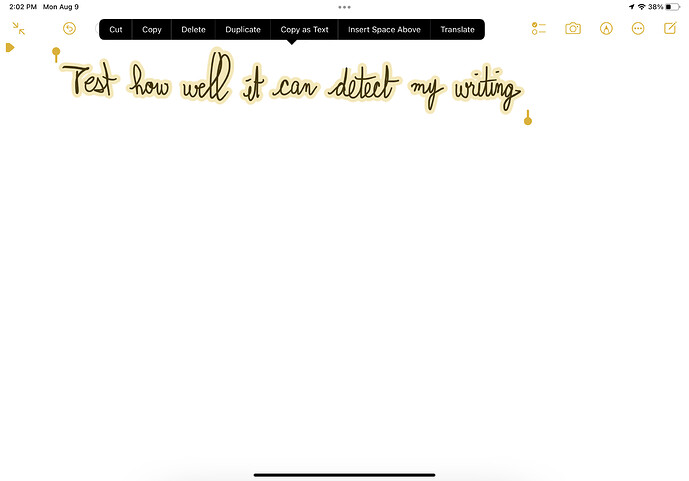 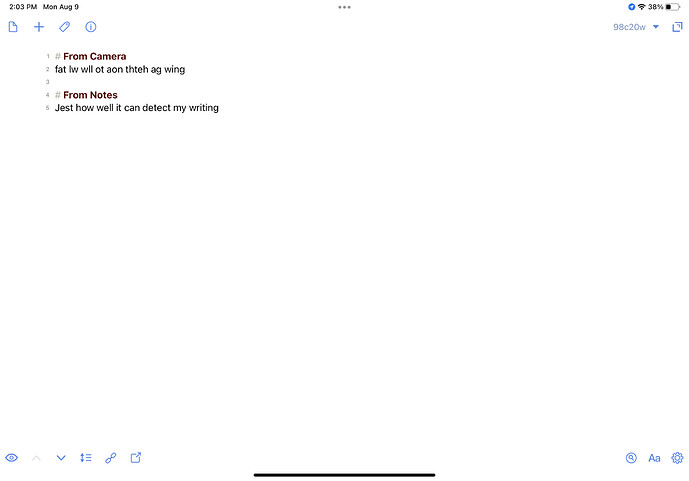 You got me examining your handwriting…

… I’m not overly surprised it got the leading “T” wrong…

This obviously isn’t a criticism of your handwriting but - given it doesn’t appear to be training - you might have to be trained.

Yes, I know that sort of defeats the point. But, apart from that one letter, it did well.

It would do worse with my sociopathic scrawl.

But still better than my typing, especially on glass.

If the live text capture worked as well as it did from Notes, I’d absolutely be content with that. It’s just the big discrepancy that makes it not usable. Mixing up the T with a J is still very usable, though maybe I can send Apple a few snippets of my handwriting do they can add it to the training sets

The odds of any intelligence, artificial or real, being able to recognize text in anything I handwrite is extremely low - so I think you are doing pretty well.