Freeze or lock a note from inadvertent changes

I am requesting this for both Mac and iOS versions.

This has been a longstanding request.

Feature Request A way to set individual drafts to read only: Easy to set on/off (or toggle) in context menu on/off in JS Scripts on/off in action settings: “After Success” - “Set Read Only” I like to archive certain draft as write protected so I can be sure I don’t change them accidentally. Use case: It could be anything: logs, quote collections etc, drafts I use for reference and often need to copy parts and sections from. That way you have the choice to have a more permanent “real archive”,…

But do make sure you know about link mode, versions and backups as these are things that can help mitigate accidental changing of data. 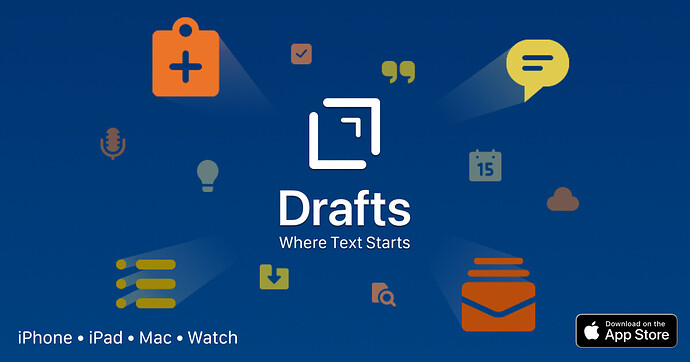 Drafts is primary for capturing and processing.

Why do you want to kwep it Drafts?

Not knowing about your special case I would suggest you generate (process) something from your note that i not editabe. HTML or evn an imae might dothe trick. Link this with an action in drafts or via hyperlink…

If you would tell us more about this content we might even help in creating a solution.

We had a maybe similar request where we added a simple script to combine the change of to a workspace with other features.

I realise I’m replying to an old post but I was just about to start a new request for exactly this.

Drafts has evolved from a simple “capture-and-process” app to one used by many as a long-term note repository. Some of these notes are still in process but many will be complete and no longer require editing. It would be useful to be able to lock these notes to prevent editing and deletion (and it would be useful if locked notes did not display the keyboard when loaded into the editor, as they would be primarily viewed for information).

It’s useful to know about Backups and Version History but these are solutions for recovering data after an accidental edit or deletion has been made. This requires the user to be aware that the unintentional edit or deletion has occurred, which may not be the case in the event of an accidental keypress (especially if this overwrites selected text) or a mis-configured action step. Link Mode does prevent editing while it is turned on but needs to be manually turned on every time a draft is opened, which isn’t a workable solution for this requirement.

A simple lock toggle on each draft would prevent unintentional (and, more importantly, unnoticed) edits and deletions and make viewing historical note content easier (by hiding the keyboard).