So we can send mails with Drafts, but is it somehow possible to send mails to Drafts?

I use one Drafts Workspace as general task inbox and being able to forward mails into drafts would help a lot. Evernote, for example, had a feature that allowed you to send a mail to a specific address and the mail than appears at Evernote.

I know Drafts does not have such a feature, but is there some method of creating a reliable workaround?

This is possible to implement in Airmail. You can build custom actions in Airmail which can utilise arbitrary URL schemes, so you can send the contents of an email to Drafts via the drafts://x-callback-url/create action.

As an Airmail user I’d not thought of that. So thanks!

Does it work with both iPad OS / iOS and Mac clients?

I only ever did this on the iPad, so not sure about the Mac.

In Spark, you can select the Open In option for the email and then select Drafts as the destination.

You can tie something into the Automatic Import feature, by having an automation of some sort that saves your email to the iCloud Drive/Drafts/Inbox folder.

Or, potentially, that opens Drafts Web Capture with appropriate query parameters derived from the email message.

Those are probably both Mac-only options, in terms of having automation hooks into Mail.

Can you be more specific regarding sending email to drafts from Spark. I use Spark and don’t see Drafts as a “service”. Nor do I see the “Open in” option. Thanks in advance.

I see it on my iPad, but curiously, not on my iPhone when I try the same there 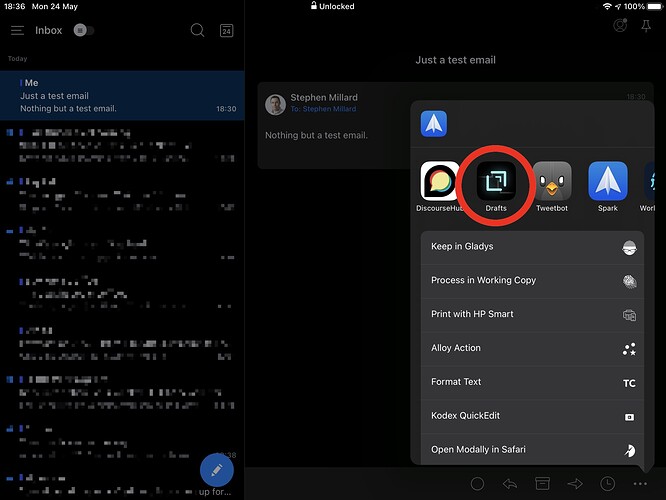 On the phone I’ve tried editing the list too, but it just isn’t available for me.

Not on my Mac, or iPhone. I’ll try the iPad later today.

I use Mailmate on the Mac, so I can’t double check that one I’m afraid.