It would be very useful to have a live preview in a split screen when editing Markdown.

Subsidiary to this, working with desktop and iPad, it would be awesome if the iPad could show a live preview while editing on the desktop. With the present versions edits made on the desktop appear quickly in the Drafts iOS editor but the preview has to be reloaded to show the edits.

I agree—this would be cool!

I also agree that this would be really useful rather than opening in a new window. I also wanted to know if there was a way to set ‘foghorn’ as the default preview style?

+1 for this! A much needed addition.

I’ve automated this with Keyboard Maestro and use Draft’s Preview shortcut (option-cmd-V) to trigger the preview in Marked.

(Workaround as long as not native share sheet support is available)

As an alternative you can use Marked services to preview the selected text. Just highlight the text, then right click and select the Preview selection in Marked option (you could apply a shortcut to it in System Preferences>Keyboard>Shortcuts>Services)

Just another option that I have started to use is an Alfred workflow that takes the selected text and sends it to Marked to preview via a shortcut. The workflow is outlined here

I think this might be what Marked 2 should support? Only the app itself can register an Extension for Share Menu, what Draft can do is to let other apps share content to it, not the reverse. 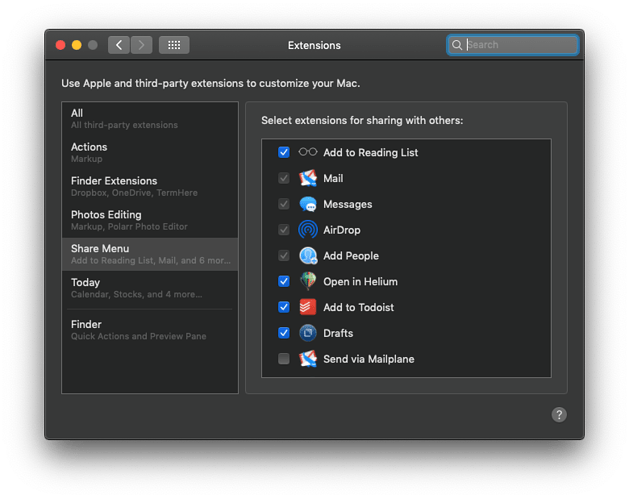 And even if Marked 2 support this feature, it may only be a one-off action, means that after sharing the text to Marked 2 for preview, the afterwards changes won’t be updated to the preview automatically.

Though I love Drafts A LOT, and markdown is my favorite writing format, I don’t think its necessary for Draft to support markdown preview functionality. Actually I’m quite surprised when I found the Show Preview item in menu.

In my mind Draft is a plain text writing tool, it should just do this one thing and do it well. While text is simple and lovely, markdown, on the contrary, is chaos and arbitrary, there are so many derivatives and extensions, different libraries/softwares have different implementations, which always result in slight difference in the rendering result. Adding markdown preview support too much/deep means Draft will involve all kinds of markdown libraries, the package will bloat, and frankly speaking, it’s hard to do it well, this has been proven by lots of markdown editors.

Thank you for your post
I am on the lower end of the IQ scale
May I ask you how are you basically format the output in Marked?
For example I end up with giant font 42 headers which I would like to bring down to find 18
I tried to edit the CSS files but I find it very difficult to understand CSS gibberish
Thank you very much