I’m currently evaluating Evernote replacements since I can no longer trust Evernote to keep my data secure and private - https://www.vice.com/en_us/article/j5yyxp/evernote-search-warrant-gave-data-to-us-government.

Drafts is plain text only (but potentially with markup), whereas Evernote notes can consist of rich text, images and attached files.

Importing plain text into Drafts on the Mac is as simple as drag & drop, but you would probably need to run some AppleScript to export the notes In Evernote to a simple plain text format.

Import on iOS can be done via iCloud folder, but the automated export not so much.

Well, I never really thought about whether or not my notes in EN are plain text or not. I use bolding and italics sometimes, list formatting frequently, and occasionally an HR, but I always assumed that EN used some form of markdown-like tagging. Not so? I bulk exported all my notes from my current job and imported them into Agenda with no issues (including embedded images, sound files, and so on). Should I not expect the same capability from Drafts? Thanks for your insights.

Evernote uses a syntax called ENML (Evernote Markup Language), but this is more akin to a HTML than say Markdown or MultiMarkdown as supported by Drafts. Though Drafts does also support HTML for previews, and technically the ENML and HTML are plain text, but most end user interactions are with it rendered.

However, as I noted above, Drafts deals only with plain text. Embedded images, sound files, etc. cannot be imported into Drafts.

You can link out to such data if it is stored somewhere else that can be accessed via URL, but that’s unlikely to be the sort of thing you want for your scenario.

Technical embedding such files as base-64 encoded data strings is probably also possible, but certainly not efficient for access and search compared to other solutions with a rich content viewer.

The Agenda app is quite different in many ways to Drafts. One of them being that it supports rich content, which is why you can view some of your rich content in it. But in a similar vein Drafts is more automatable/prgarmmable than Agenda. The apps simply have a different focus.

We could use a “does its best” HTML to Markdown import filter.

Actually I have 526 blog posts in HTML format I’m moving to a non-employer-owned new blog site. Apart from the graphics element, it‘s a reasonable test bed…

You could always import the HTML and then use an action to call a shortcut to convert, return the text to Drafts, and then update the draft content, or create a new tagged draft for a non-destructive conversion. Remember also that you can batch process by running an action against selected drafts. 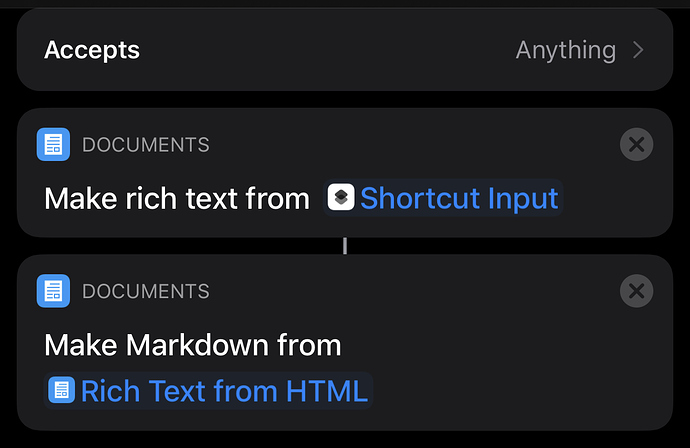 I’d forgotten about that. That sounds like a good fun thing to play with over the holidays.