Embedded shortcut action is not executed

Hello, the draft creation process works fine, but no tag is added, although the action Tag Temp (add the word temp as tag) works. How should I troubleshoot this issue ? The shortcut used to work and work much faster in iOS 12 which is strange. I tried with different tag actions and it never works.
thank you 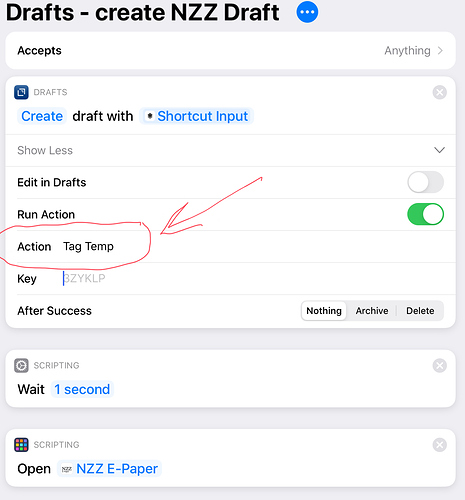 This is an old, deprecated URL-based shortcut action for Drafts. On iOS 13, it should be removed and replaced with new parameter-based shortcuts actions provided by Drafts. I think the Shortcuts team left in support for these in existing shortcuts - but they don’t always work quite right with some of the Shortcuts changes on 13.

The “correct” way to do this on 13 is to have a Create Draft action, which his direct support for setting tags. 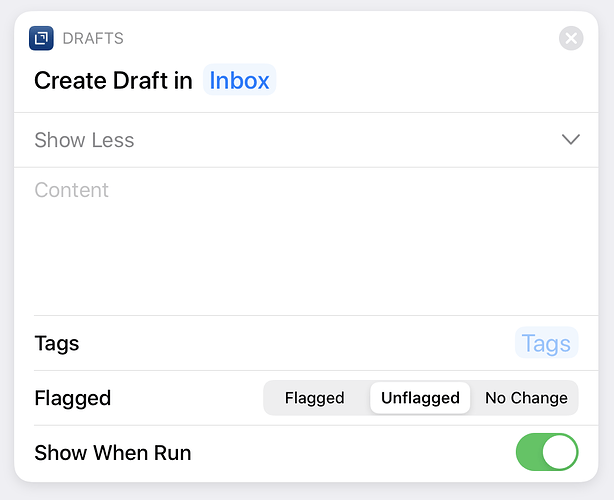 Keeping in mind that I am not very smart and should not serve as a reference, some people may have misread your Tips and Tricks emails and may believe, like I did that if I allow shortcuts to install untrusted shortcuts via settings, I will have access to a whole repertoire of drafts related shortcuts written by you, a few examples of which you list in your email.

A few years ago, I could read ancient Egyptian hieroglyphs. I could read inscriptions on monuments and passages in the book of the Dead. Despite that I was unable to decrypt your email correctly !

A suggestion: to create a directory of drafts related shortcuts on your Drafts Community web site, analogous to your Drafts action directory.

Quote from your tips and tricks email.
Installation Note: To use these Shortcuts, you must be running iOS 13 or greater, and Drafts 15.0 or greater. To install example Shortcuts from the links below, you must enable “Allow Untrusted Shortcuts” in iOS Settings > Shortcuts .

I think perhaps you’re confusing the new Drafts shortcuts actions, which are now available in the Shortcuts app, with examples of the new types of shortcuts you can create with these actions. You can use the actions to build your own shortcuts. No trusting involved. You’ll find them in the Drafts section of the Applications section of Shortcuts. If you just want to make your own shortcuts using the new parameters and actions you don’t need to deal with the untrusted thing at all.

But to download a shortcut from someone else (what you reference in your quote from Greg’s summary) you need to allow untrusted shortcuts in your settings. It’s an ominous word that Apple is using to make clear that these aren’t created by them.

thank you very much for the crystal clear clarification