When I use the action on iOS it opens the Buffer app but nothing happens.

The Buffer app opens and the draft gets archived, but the text does not carry through to Buffer.

iPhone12 Pro + latest OS + latest Drafts and all that stuff.

Anyone have ideas? Thanks!

I *think* Buffer deprecated the URL scheme around the same time as they deprecated API access. You can try just opening the URL in Safari and you get the same result indicating the “issue” is with the Buffer app rather than the Drafts action. 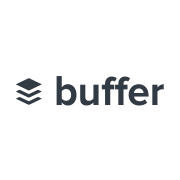 Buffer makes it super easy to share any page you're reading. Keep your Buffer topped up and we automagically share them for you through the day.

It should be possible to build a similar (but cross-platform) action using a service that offers an API, like HootSuite or AyrShare.

ah gotcha, that makes total sense. Thanks for chiming in!

I hid that Buffer action and added a warning to it in the Directory to avoid confusion.